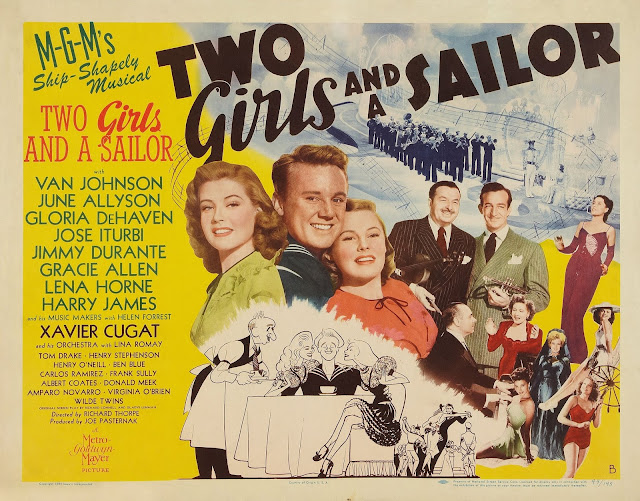 A sailor helps two sisters start up a service canteen. The sailor soon becomes taken with gorgeous sister Jean, unaware that her sibling Patsy is also in love with him.

Jean Deyo: If you understood, Harry, you’d understand. I’m an actress; but, after all, I’m a woman too.

Harry James: You certainly are, honey.

[after hitting a high note in the song, “Inka Dinka Doo”]

Billy Kipp: That note was given to me by Bing Crosby, and was he glad to get rid of it.

Is this interesting? | Share this
Billy Kipp: [Thinking he was washed up as a comedian] If I tried to be funny, people would only laugh at me!

Frank Miller: I’m taking over. You sing I’ll do the work.

Patsy – Age 4: [to one-year-old Jean] I told you to stay out of men’s dressing rooms.

Billy Kipp: I know there are a million good lookin’ guys; but, I’m a novelty!

Patsy Deyo: I did.

Jean Deyo: And in front of our public, too!

Jean Deyo: There is such a thing as love, you know.

Patsy Deyo: Oh, yes, I know. It’s that gooey stuff you fall into and I have to get you out of at least once a week. Sometimes twice! Why, I’ve had to pinch you in Paducah, Peoria, Tacoma, Topeka, Johnstown, Jamestown, Augusta, Maine and Georgia! And if we get to New York, I’ll pinch you there too.

Jean Deyo: Don’t you dare pinch me in New York.

Patsy Deyo: Oh, yes I will. I’ll pinch you, pinch you until you meet a good man!

Jean Deyo: But, I want to meet a rich one.

Jean Deyo: It’s signed like all the others, just “Somebody.” I wonder what sort of man he is?

Patsy Deyo: I’ll tell you, dearie. He’s fat, fifty, and hopeful. Not much hair and too much stomach.

Jean Deyo: I was only trying to be a good neighbor. The least a girl can do is say no when an attractive man…

Patsy Deyo: [to multiple sailors on the street] We’re having a little shindig at my house tonight, would you like to come along?

Patsy Deyo: Thanks for the thought, sailor, but, I’ll tell you what I tell all the boys: no.

Billy Kipp: I had a house with a spouse. And I had a kid. Just one son. What a cute little guy he was. Blue eyes – and all nose.

Billy Kipp: I went down – down and down. But, am I sorry for myself? You bet I am!

Billy Kipp: Kaboom! Just as I figured, I’m a witch.

Lina Romay: [singing] Don’t you know its more romantic when the dance is slow

Lina Romay: What’s the good of feeling high when all the lights are low

Virginia O’Brien: [singing] I’m the gal the guys refer to as the Cuban Rave, Every man I meet would like to be my slave…

Billy Kipp: This somebody could be anybody – except me.

Canteen Dancer: Well, I get lots of practice. I do four shows a day. All the girls you see in here, in costumes, drop in between shows.

Marine Sergeant: Do you have to go get another show tonight?

Canteen Dancer: Mmm-hmm. But, I’ll be back.

Marine Sergeant: You will? I would say, you really ought to be resting. Look, why don’t you take a little nap.

[puts her head on his shoulder while they’re dancing]

Gracie Allen: [to Albert Coates] Are you a musician?

José Iturbi: Why, Miss Allen, Mr. Coates has conducted the London Symphony for many years and he has appeared with the Philadelphia Orchestra, with the New York Philharmonic, and with two State Operas! Both Leningrad and Moscow.

Gracie Allen: Yes, but, has he ever played with any named bands, like Harry James or Spike Jones?

Ben Blue: Billy Kipp, you’re a great comic. What are you doing here in an office?

Billy Kipp: Why I’m an executive!

Billy Kipp: One could be both, Mr. Blue.

Billy Kipp: The flesh is willing; but, the spirit is weak. I’m frustrated.