Skip to content
Top The Great Gatsby Quotes
Jay Gatsby is the title character of the 1925 F. Scott Fitzgerald novel The Great Gatsby. The fictional character, a millionaire and the owner of a luxurious mansion where extravagant parties are often hosted, is described by the novel’s narrator, Nick Carraway, as being “the single most hopeful person I’ve ever met”. 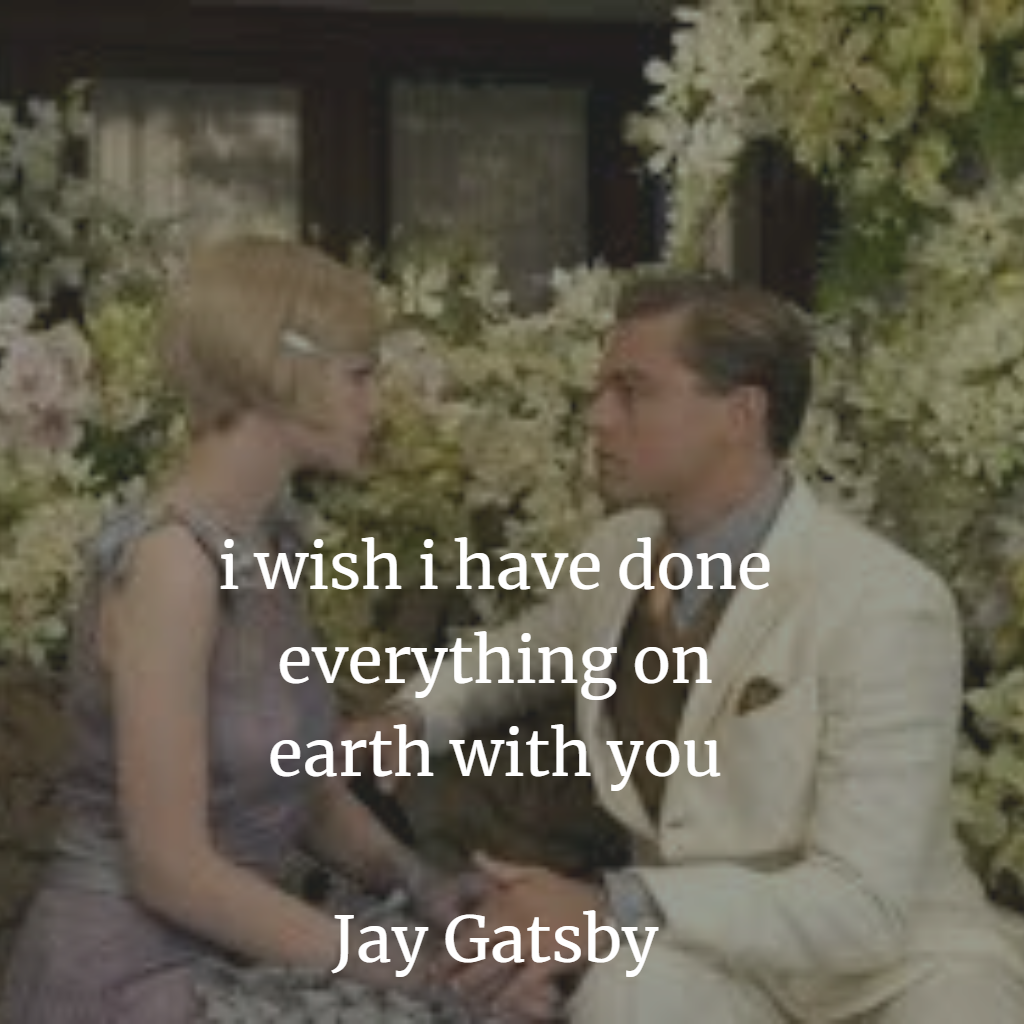 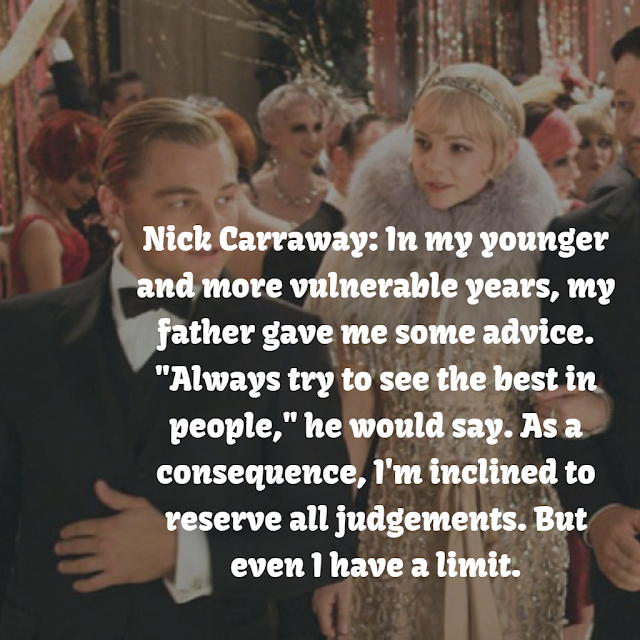 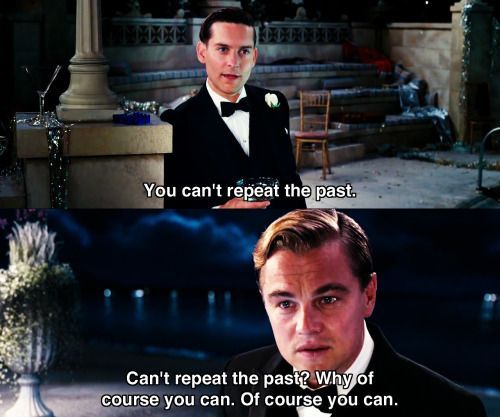 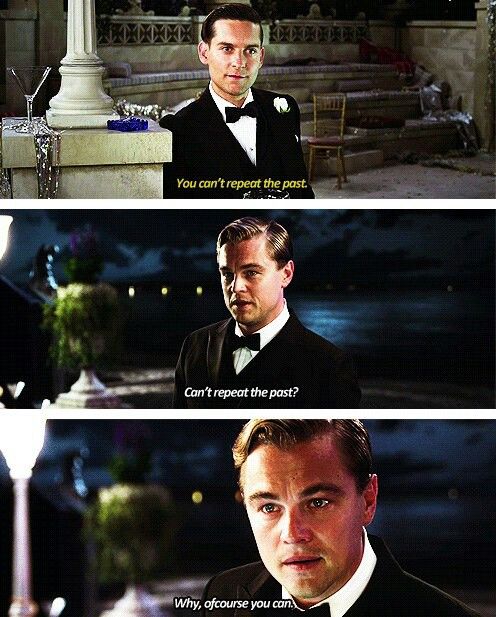 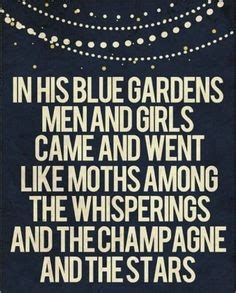 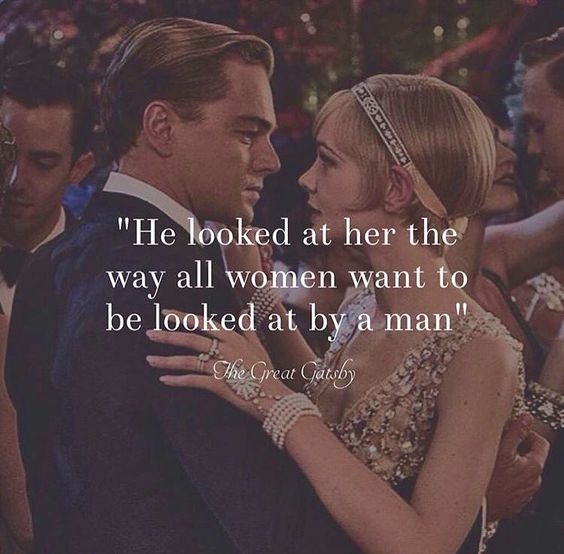 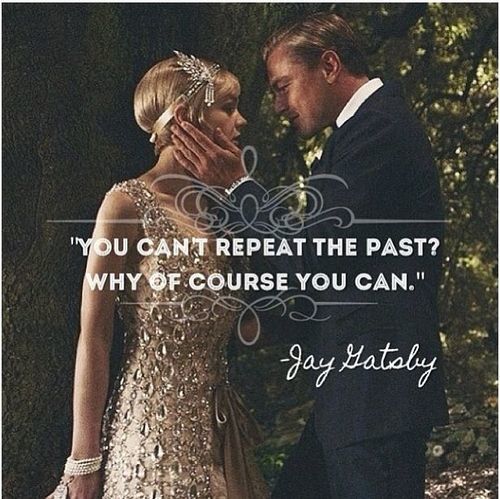 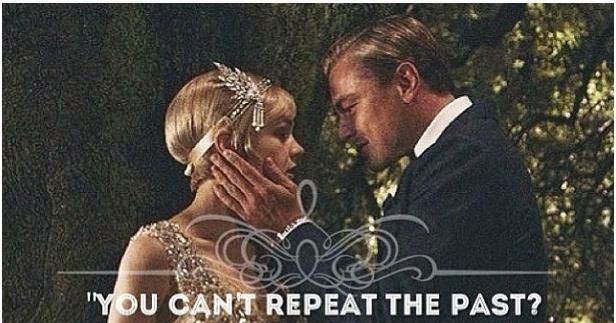 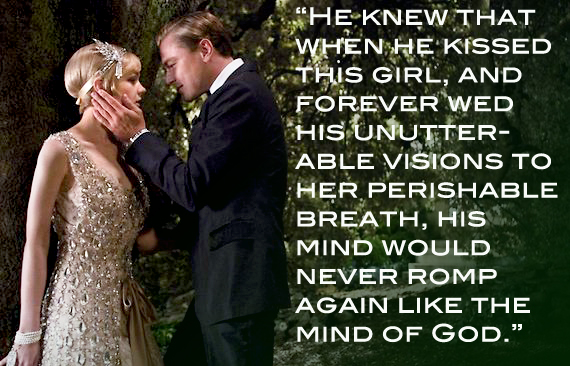 Nick Carraway: You can’t repeat the past.

Jay Gatsby: Can’t repeat the past?

Jay Gatsby: Why, of course, you can… of course you can.

Nick Carraway: Gatsby believed in the green light, the orgastic future that year by year recedes before us. It eluded us then, but that’s no matter – tomorrow we will run faster, stretch out our arms farther… And one fine morning – So we beat on, boats against the current, borne back ceaselessly into the past.

Nick Carraway: In my younger and more vulnerable years, my father gave me some advice. “Always try to see the best in people,” he would say. As a consequence, I’m inclined to reserve all judgments. But even I have a limit.

Nick Carraway: [Voice-over] I was always glad I said that. It was the only compliment I ever paid him.

Jay Gatsby: I knew it was a great mistake for a man like me to fall in love…

Daisy Buchanan: I hope she’ll be a fool – that’s the best thing a girl can be in this world, a beautiful little fool.

186 of 189 found this interesting | Share this
Jordan Baker: Well, I don’t care. He gives large parties, and I like large parties – they’re so intimate. Small parties, there isn’t any privacy.

Daisy Buchanan: All the bright precious things fade so fast… and they don’t come back.

Nick Carraway: [narrating] They were careless people, Tom and Daisy. They smashed up things and people, and then retreated back into their money and their vast carelessness.

Jay Gatsby: My life, old sport, my life… my life has got to be like this.

Jay Gatsby: It’s got to keep going up.

Nick Carraway: Reserving judgments is a matter of infinite hope.

Jay Gatsby: I knew that when I kissed this girl, I would be forever wed to her.

Nick Carraway: His Smile was one of those rare smiles that you may come across four or five times in life. It seems to understand you and believes in you just as you would love to be understood and believed in.

Jay Gatsby: I-I’m certainly glad to see you, as well.

Tom Buchanan: Daisy, can’t you see who this guy is, with his house and his parties and his fancy clothes? He is just a front for Wolfsheim, a gangster, to get his claws into respectable folk like Walter Chase.

Jay Gatsby: The only respectable thing about you, old sport, is your money. Your money, that’s it. Now I’ve just as much as you. That means we’re equal.

Tom Buchanan: She is. We’re all different from you. You see, we were born different. It’s in our blood. And nothing that you do or say or steal… or dream up can ever change that. A girl like Daisy…

Nick Carraway: [Voice-over] Gatsby looked, at that moment, as if he had… killed a man.

Nick Carraway: I expected him to be…

Daisy Buchanan: Then telephone for an axe.

Nick Carraway: [narrating now] Thirty. The promise of a decade of loneliness. The formidable stroke of 30 died away as Gatsby and Daisy drove on through the cooling twilight – towards death.

36 of 38 found this interesting | Share this
Jay Gatsby: If there’s anything that you want, just ask for it, old sport.

Daisy Buchanan: I wish we could just run away.

Jay Gatsby: Run away? No. Daisy, darling, that… that wouldn’t be respectable. We’re gonna live here, in this house. You and me.

Jay Gatsby: I never realized how extraordinary a nice girl could be.

Nick Carraway: Stocks reached record peaks, and Wall Street boomed a steady golden roar. The parties were bigger, the shows were broader, the buildings were higher, the morals were looser, and the ban on alcohol had backfired. Making the liquor cheaper. Wall Street was luring the young and ambitious, and I was one of them.

Jay Gatsby: If it wasn’t for the mist, we could see the green light.

Jay Gatsby: The one that burns all night at the end of your dock.

Nick Carraway: [narrating] Possibly, it had occurred to Gatsby that the colossal significance of that light had vanished forever. Now it was once again just a green light on a dock and his count of enchanted objects had diminished by one.

Jay Gatsby: [while recklessly driving his yellow car] Look here, Old Sport. What… What is your opinion of me, anyhow?

Jay Gatsby: Yes! Yes, your opinion. I don’t want you to get the wrong impression from all these… from all these bizarre accusations you must be hearing. A pack of lies, I guarantee you. You’ve heard all the stories?

Jay Gatsby: I will tell you God’s truth. God’s truth about myself. I am the son of some very wealthy people from the Middle West. Sadly, all of them are dead now. I was brought up in America but educated at Oxford because all my ancestors have been educated there for many years. You see, it’s a family tradition.

Nick Carraway: [narrating] The way he spoke! No wonder people thought he was lying.

Tom Buchanan: I’d rather not be the polo player.

Daisy Buchanan: I’ve been everywhere and seen everything and done everything. I’ve had a very bad time, Nicky. I’m pretty cynical about everything.

Nick Carraway: Ah. Your daughter, I suppose she talks and eats and everything?

Daisy Buchanan: Pammy? Oh, yes. Listen, Nick, when she was born, Tom was God knows where… with God knows whom. And I asked the nurse if it was a boy or girl. And she said it was a girl and I wept, “I’m glad it’s a girl. And I hope she’ll be a fool. That’s the best thing a girl in this world can be. A beautiful little fool.” All the bright precious things fade so fast. And they don’t come back.

Nick Carraway: I remember how we had all come to Gatsby’s and guessed at this corruption while he stood before us concealing and incorruptible dream…

Daisy Buchanan: [dancing with Gatsby] All my life. I wish it could always be like this.

Jay Gatsby: It will be.

Nick Carraway: [narrating] If only if it’d been enough for Gatsby just to hold Daisy. But he had a grand vision for his life and Daisy’s part in it.

Tom Buchanan: Life is something you dominate, Nick! If you’re any good.

Jordan Baker: See, I didn’t realize until the other night that I’d met Gatsby. Five years ago. In Louisville. It was the day I got my new English golf shoes. Daisy was by far the most popular girl with the officers from Camp Taylor. One of them was in the car with her. It was Gatsby. And the way he looked at her is the way all girls want to be looked at.

Meyer Wolfsheim: What a gentleman. From one of the finest families in the Midwest. Ah, sadly, all dead now. When I first made the pleasure of Mr. Gatsby’s acquaintance, just after the war, I knew I’d discovered a man of fine breeding. A war hero! Such medals! And an Oxford man. You know Oxford?

Meyer Wolfsheim: Then you would know that when it comes to married women, a man like this can be trusted. With a friend, with someone like you, he’d never so much as look at your wife.

Jordan Baker: What is?

Nick Carraway: The fact that Gatsby’s house is just across the bay.

Jordan Baker: It’s no coincidence. He bought that house to be near her. He threw all those parties, hoping she’d wander in one night. He constantly asked about Daisy. I was just the first person that knew her.

Nick Carraway: All that for a girl he hasn’t seen in five years.

Nick Carraway: [to Catherine who was giving him some pills/drugs] Oh no. My nerves are fine, thanks.

Jay Gatsby: [Daisy cries after Gatsby showers her with fancy shirts] What is it? Daisy, Daisy darling, what is it?

Daisy Buchanan: It… it makes me sad.

Nick Carraway: [narrating] Five lost years struggled on Daisy’s lips, but all she could manage was…

Daisy Buchanan: [Daisy narrating letter] We can’t lose each other. And let all this glorious love end in nothing. Come home. I’ll be here waiting and hoping for every long dream of you to come true.

Tom Buchanan: Civilization is going to pieces! Have you read “The Rise of the Colored Empires” by this fellow, Goddard? Everybody ought to read it. The idea is it’s up to us, the dominant race, to watch out or these

Tom Buchanan: other races will have control of things.

Daisy Buchanan: We’ve got to beat them down.

Jordan Baker: Everything! Oh, but here I am tantalizing you when I swore I wouldn’t tell.

Nick Carraway: The city seen from the Queensboro Bridge is always the city seen for the first time. In its first wild promise of all the mystery and the beauty in the world. Anything can happen, now that we have slid over this bridge, I thought. Anything at all. Even Gatsby could happen.

Nick Carraway: Gatsby’s real name was James Gatz. His parents were dirt-poor farmers from North Dakota, but he never accepted them as his parents at all. In his own imagination, he was a son of God, destined for future glory.

Tom Buchanan: You know, a lot of these newly rich people are just filthy bootleggers?

Daisy Buchanan: Not Gatsby. He’s a businessman. He owned a lot of drugstores.

Policeman: Pull over! Pull over to the curb!

[shows him his business card]

Policeman: Right, you are! I’ll know you next time, Mr. Gatsby.

Meyer Wolfsheim: [to Nick] I understand you’re looking for a business connection.

Meyer Wolfsheim: Oh! Oh, I beg your pardon. I had the wrong man!