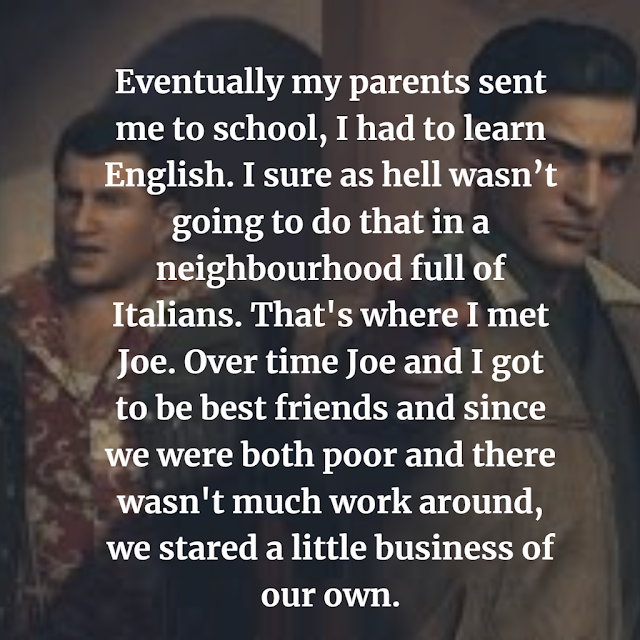 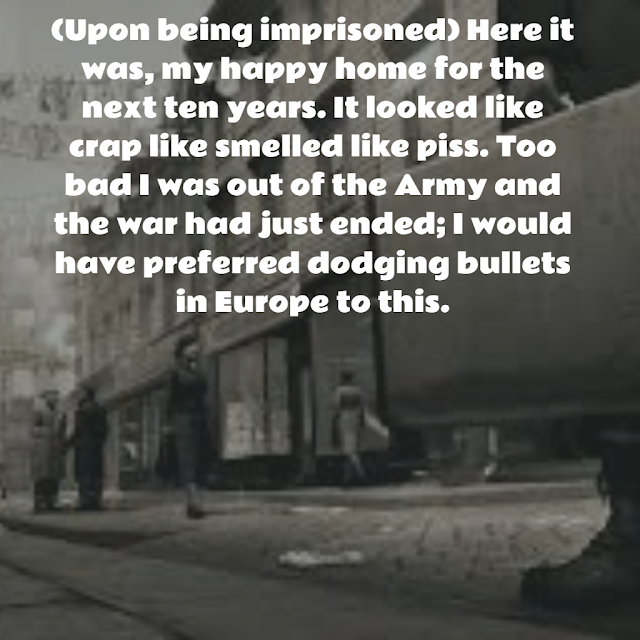 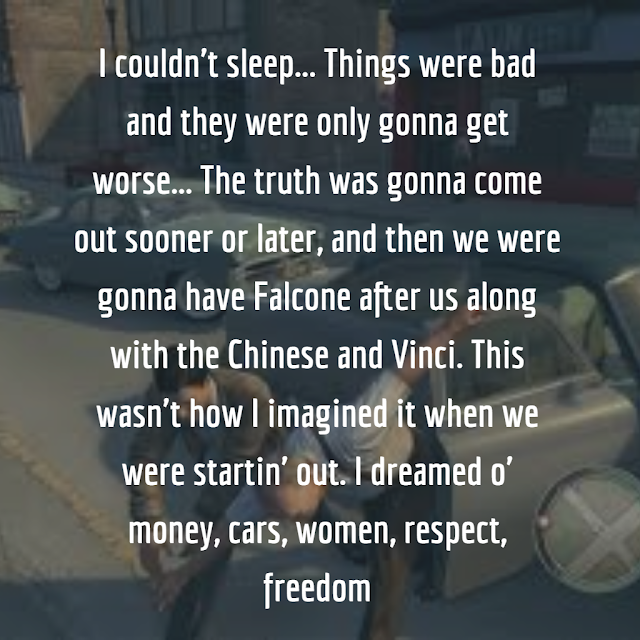 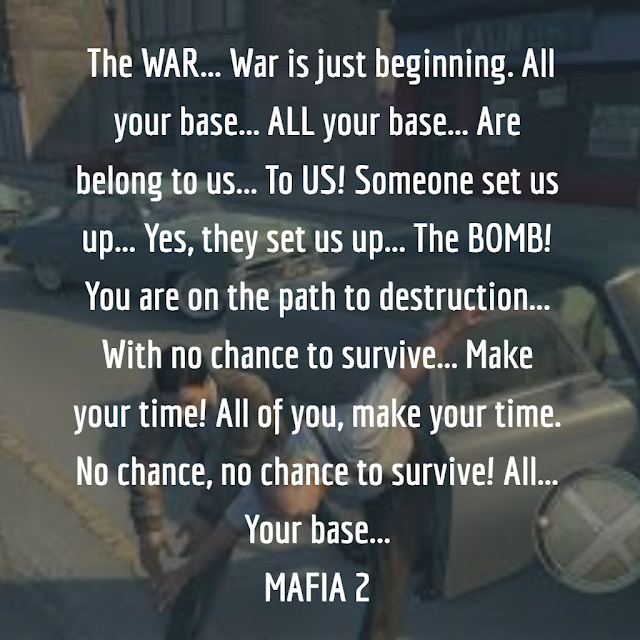 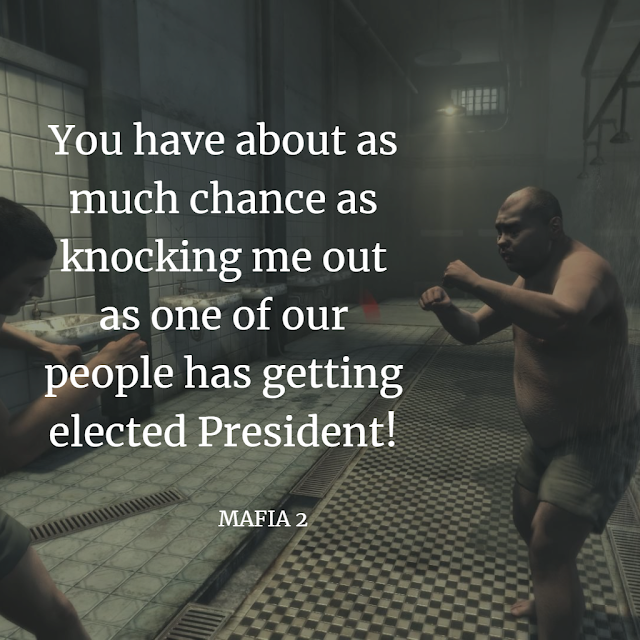 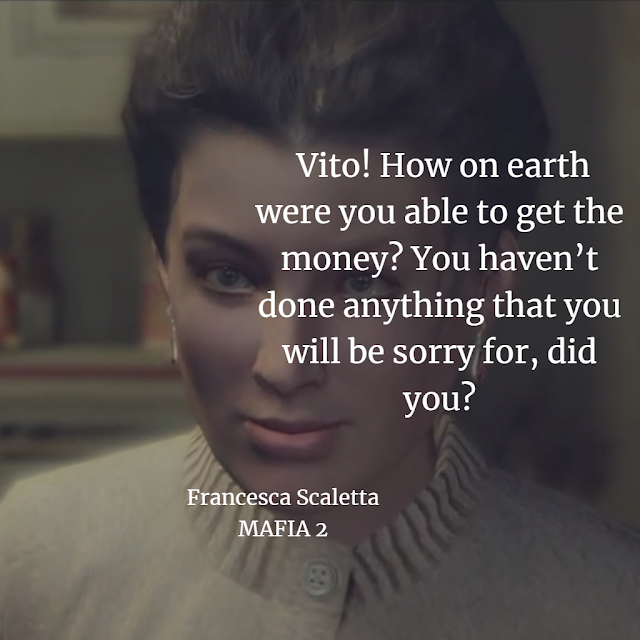 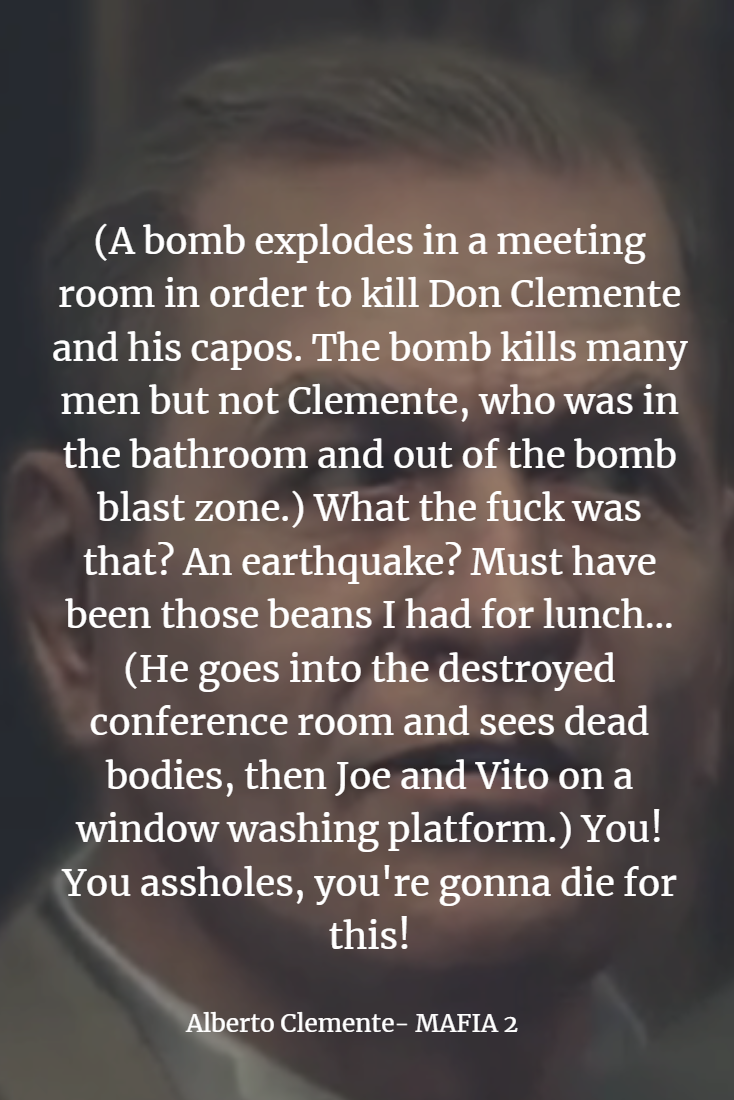 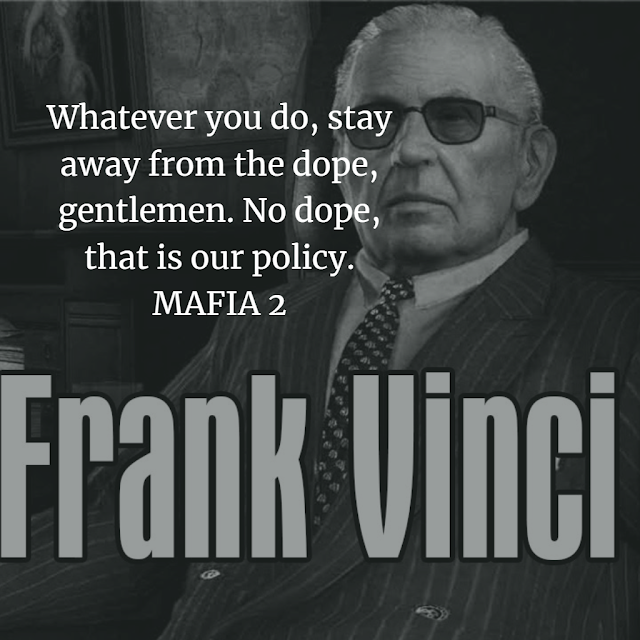 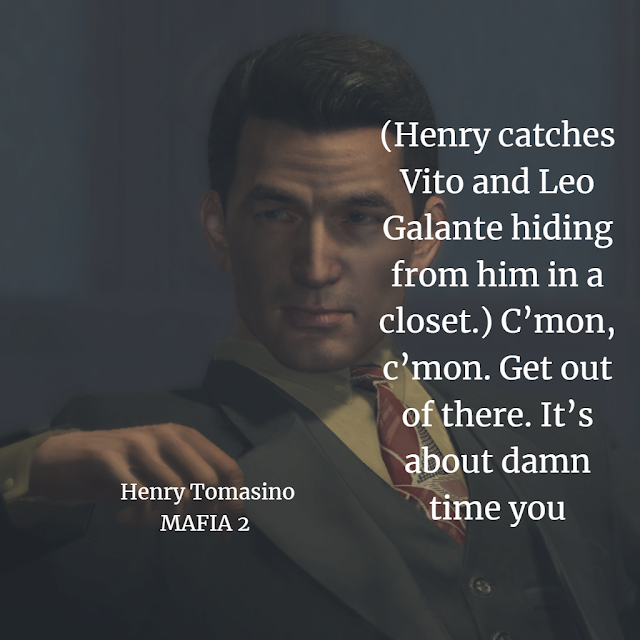 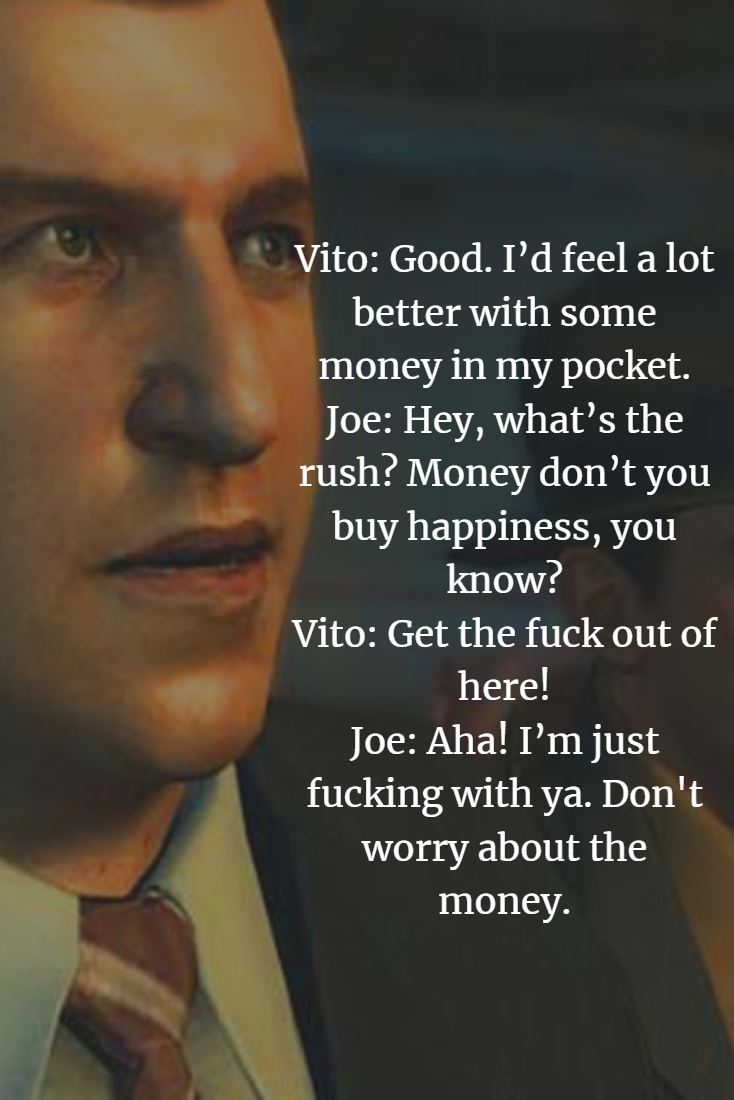 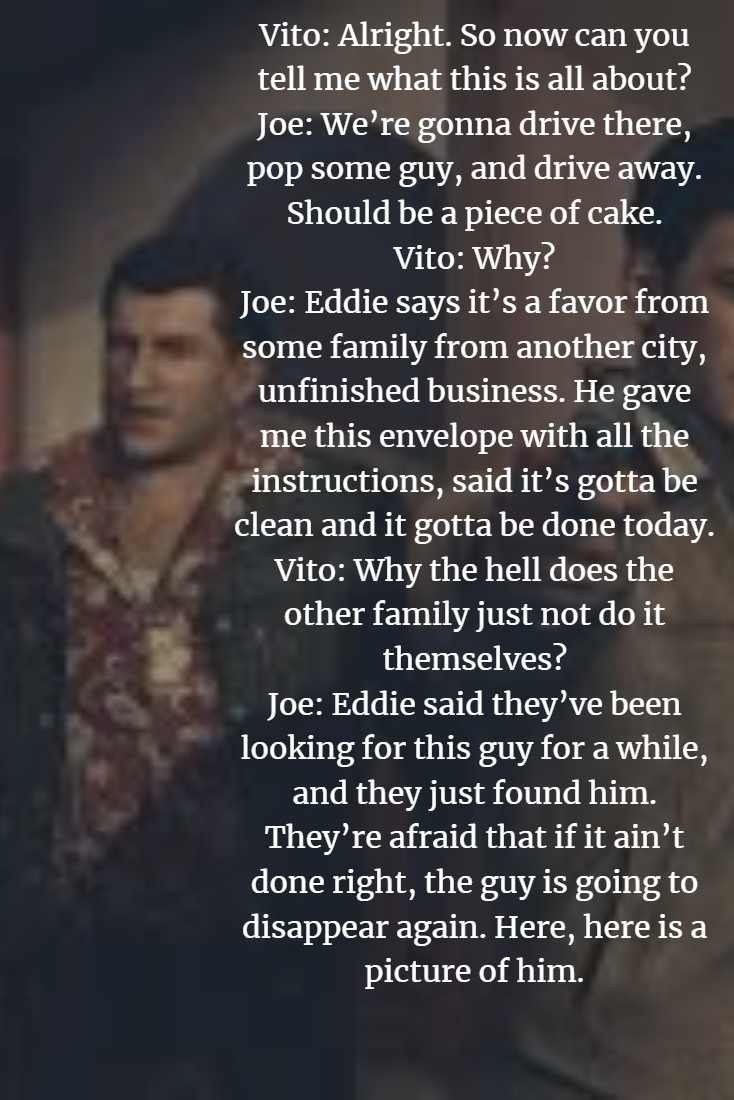 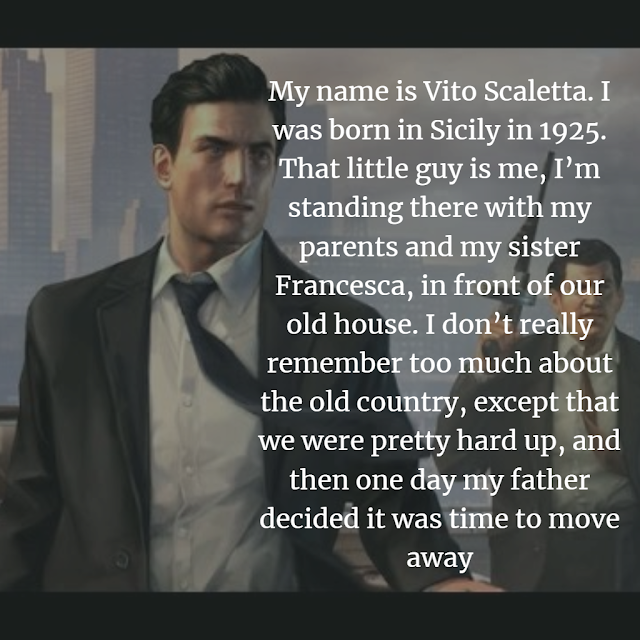 Henry Tomasino: If I don’t make it…

Joe Barbaro: Hey, hey, don’t go saying that, pal. It’s just a scratch. The doc will give you a few stitches and then we’ll all go out and celebrate.

Joe Barbaro: Shhh… you shouldn’t talk right now. Helps conserve your strength. I saw that in a movie once.

Henry Tomasino: Yeah? And what happened to the guy in the movie?

[Joe and Vito are in a gunfight with the Chinese Triad]

Joe Barbaro: Where the fuck are they all coming from?

Vito Scaletta: Must be a tunnel to China around here somewhere…

Vito Scaletta: Hey, who’s that guy back there?

Vito Scaletta: The guy at the body shop.

Joe Barbaro: Oh, Tommy. He’s my buddy’s nephew. He’s kinda quiet, but let me tell you, the kid’s some hell of a dancer. Saw him at the old dance hall in Oyster Bay a couple of weeks ago. He had all the broads going nuts.

Vito Scaletta: Do I detect a hint of, uh, jealousy?

Joe Barbaro: Are you kidding? I don’t need no dance moves. I got charmed, my friend. Here, I’ll give you some of my lines, so maybe you won’t have to spend so many nights with Rosie Palm and her five sisters. Hey, here’s one. Hey, is that a mirror in your pocket? ‘Cos I can see myself in your pants.

Joe Barbaro: [From Trailer] The working man’s a sucker, that’s for damn sure.

Vito Scaletta: You said it.

My name is Vito Scaletta. I was born in Sicily in 1925. That little guy is me, I’m standing there with my parents and my sister Francesca, in front of our old house. I don’t really remember too much about the old country, except that we were pretty hard up, and then one day my father decided it was time to move away. Away from Sicily, across the ocean to start a new life in America. Never in my life had I seen anything as fantastic as Empire Bay, it was beautiful. But on the other hand, I’d never seen anything more filthy and so disgusting as our new rathole of an apartment. The American dream was more like a nightmare. My father started working at the port for the guy who arranged our immigration, it was back-breaking work, and the little money he made mostly went toward booze. Eventually, my parents sent me to school, I had to learn English. I sure as hell wasn’t going to do that in a neighborhood full of Italians. That’s where I met Joe. Over time Joe and I got to be best friends and since we were both poor and there wasn’t much work around, we stared a little business of our own. (Cut to a scene showing Joe and Vito as juvenile delinquents stealing; Vito gets captured by a police officer) Well, that time, it didn’t work out so good. The year was 1943 and America was at war and they needed guys who spoke the language to help out with the invasion of Sicily, I was 18 and anything seemed better than jail, who says you can’t go home again.

(Upon being imprisoned) Here it was, my happy home for the next ten years. It looked like crap like smelled like piss. Too bad I was out of the Army and the war had just ended; I would have preferred dodging bullets in Europe to this.

I couldn’t sleep… Things were bad and they were only gonna get worse… The truth was gonna come out sooner or later, and then we were gonna have Falcone after us along with the Chinese and Vinci. This wasn’t how I imagined it when we were startin’ out. I dreamed o’ money, cars, women, respect, freedom. I guess I ended up gettin’ all of that more or less, but along with it came to prison, living in constant fear, and the blood of my friends. I ducked it as long as I could, but it was finally catching up with me. It was all just a matter of time…

Black prisoner
You have about as much chance as knocking me out as one of our people has got elected President!

Francesca Scaletta
(After Vito presents her with the money to retire their father’s debt) Vito! How on earth were you able to get the money? You haven’t done anything that you will be sorry for, did you?

Don Clemente
(A bomb explodes in a meeting room in order to kill Don Clemente and his capos. The bomb kills many men but not Clemente, who was in the bathroom and out of the bomb blast zone.) What the fuck was that? An earthquake? Must have been those beans I had for lunch… (He goes into the destroyed conference room and sees dead bodies, then Joe and Vito on a window washing platform.) You! You assholes, you’re gonna die for this!
Don Vinci
Whatever you do, stay away from the dope, gentlemen. No dope, that is our policy.

Henry Tomasino
(Henry catches Vito and Leo Galante hiding from him in a closet.) C’mon, C’mon. Get out of there. It’s about damn time you came out of the closet.