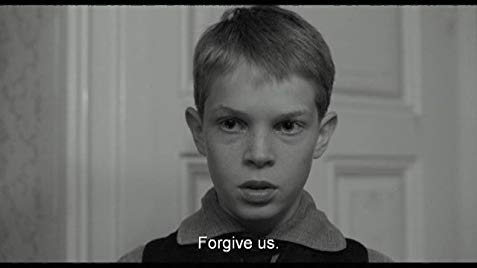 Christian Friedel, Ernst Jacobi, Leonie Benesch
The action takes place in a German village in the fifteen months that precede World War I.

Among the people who live there are a baron, who is a large landowner and a local moral authority, his estate manager, a pastor with his many children, a widowed doctor and a schoolteacher who is thinking of getting married. It is he who, many years later, tells this story.

Though everything seems to be quiet and orderly, as it always has been, with the seasons following each other, and good harvests following bad ones, suddenly some strange events start to occur. If some appear to be quite ordinary, even accidental — a farmer’s wife dies falling through rotten floorboards — others are inexplicable and may well be malevolent.

Thus, a wire placed at knee-height has brought down the horse being ridden by the doctor, who is severely wounded.

There’s more of the same: an unknown hand opens a window to expose a newborn baby to the intense cold of the winter. A whole field of cabbages, on the baron’s land, are beheaded with a scythe. One of the Baron’s sons disappears: he is found his feet and hands bound, his buttocks lashed by a whip. A barn belonging to the manor is set on fire. A farmer hangs himself. A midwife’s handicapped child is found tied to a tree, in a forest, seriously beaten, with a threatening message on his chest speaking of divine punishment.

The village is worried, and at a loss as to what to do. The baron whose wife will soon leave the village to go to live in Italy makes a speech in the church, but it has no effect. The pastor, a particularly strict character, had since the beginning of the events, tied a white ribbon to the arm of his two eldest children, a boy and a girl: it is to remind them permanently of their duties to purity. In spite of these ribbons, his own family is not spared. His eldest son admits that he masturbates. The pastor’s pet bird is stabbed with a scissor by the pastor’s daughter.

The schoolteacher, whose pupils are growing more and more unruly, and who is considering getting married (it is the only love-story in the film), starts little by little to unravel the mystery. What he discovers seems incredible to him: those guilty of most of these misdeeds are the village children. They have formed a secret society and their leader seems to be Klara, the pastor’s daughter.

Why did the children behave this way? The schoolteacher can’t say. They are haunted by dark feelings, fears, a desire to revolt, to dominate, to conceal, to be violent. All this is heralding something that will explode fifteen or twenty years later, when this generation has grown up.

The schoolteacher tries to reveal what he thinks he has found out to the pastor. He is rebuffed. There’s no question of bringing that out into the open. The pastor insults him, and even threatens to report him. Our children guilty? It’s inconceivable.

We learn that the Archduke of Austria has been murdered by a Serbian in Sarajevo. An international crisis is brewing.

The worries and the dramas of the village are soon lost in the strange excitement of the coming war. Later, the schoolteacher ponders over it again: didn’t those events contain the germs of the tragedies that followed? Weren’t the barbaric acts of the children, deep down, the natural consequences of what they had been taught?

Martin: I gave God a chance to kill me. He didn’t do it, so he’s pleased with me.

The Doctor: My God, why don’t you just die?

The Narrator: I don’t know if the story that I want to tell you, reflects the truth in every detail. Much of it I only know by hearsay, and a lot of it remains obscure to me even today, and I must leave it in darkness. Many of these questions remain without answer. But I believe I must tell of the strange events that occurred in our village, because they may cast a new light on some of the goings-on in this country…