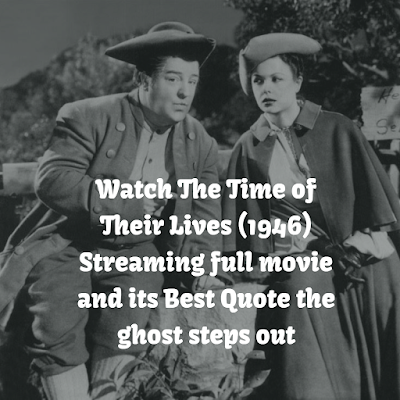 Abbott and Costello are, respectively, a butler and a tinker in the Revolutionary War-era United States. They both love the same woman, a maid, but she only has eyes for Lou.
Although Bud hopes to dispatch his rival, a group of soldiers mistakenly shoots and kills Costello and Marjorie Reynolds, thinking them traitors, when in fact Lou has a letter of reference from General George Washington and Reynolds (playing Melody Allen) was just about to expose the real traitors (including her fiancé)

The Time of Their Lives (1946) best movie quotes

Mildred Dean: [to Emily] Pardon me, but did I see you in “Rebecca?”

Horatio Prim: [he and Melody collide and are wearing each other’s clothes] Odds bodkins, we’re all mixed up!

Horatio Prim: Melody, don’t ever do that again, I’m a boy!

Horatio Prim: [after seeing Emily for the first time] Zounds! What well did she come out of?

[Gives him the gun. Horatio turns to the horse behind him]

Horatio Prim: Here, this is for you. Now, what do I shoot with?

Mildred Dean: [to June about Dr. Greenway] Last week he said that the rash I had wasn’t an allergy, it was a guilt complex because I kicked your grandma in the bustle when I was 2 years old.

Sheldon Gage: Come on Ralph, now tell us what happened.

Cuthbert Greenway: Bottles floating through space, glasses filling up by themselves, and somebody tooted into my stethoscope!

Horatio Prim: Be patient? Melody, do you realize that my Nora has been waiting on me for 165 years? And a girl will only wait so long, and no longer!

Melody Allen: [turning on the house’s electric lights] What an astonishing idea… probably got it from Ben Franklin, he’s always inventing things.

Emily: [in a trance and speaking with the voice of Thomas Danbury] Melody, my beloved, it’s Tom. I’ve come to help you.

June Prescott: Oh, Shelly, what does it mean?

Sheldon Gage: It-it must be Danbury speaking through Emily.

Melody Allen: How can that be?

Horatio Prim: I don’t know, they say only the good die young.

Melody Allen: You know no self-respecting ghosts do any haunting before midnight.