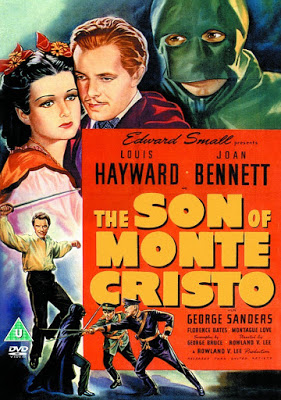 Top Quotes from The Son Of Monte Cristo 1940

Edmund Dantes Jr.: I’m worn out climbing in and out of windows and up and down chimneys. It’ll be such a relief to go through an ordinary door again.

Opening crawl: Menaced by more powerful nations, the country of Lichtenburg – tiny but proud – is known as the Jewel of the Balkans. Steeped in the ancient traditions of romance and chivalry, her people hold unswerving loyalty to the throne – on which now sits the young Grand Duchess Zona, who rules under the sinister shadow of one man, General Gurko Lanen.

Innkeeper: After great effort, I, Hercules Schneider, have found you the only carriage in Petsh. Of course, the horses may not be the best in the world…

Countess Mathilde: Can they walk?

Countess Mathilde: That’s all that’s necessary. Point them to Paris and start them moving.

Countess Mathilde: You don’t say. It usually is at night.

[In the catacombs, General Lanen finds the Resistance hideout deserted. A table has been set with several well-dressed skeletons sitting in chairs around it. A message has been written in chalk on the table top]

Message: Baron Von Neuhof and I regret not being present to receive you in person but you should feel perfectly at home in such company – The Torch.

Gen. Gurko Lanen: The Torch! Whoever he is, this ‘Torch’ is dangerous. He has a sense of humor.

Gen. Gurko Lanen: The power of diplomacy lies in the fact that people never discover the truth until it’s too late.

Edmund Dantes Jr.: By the time they figure out where we are, we won’t be there.

William Gluck: I thought you were in a hurry to get me in.

Colonel Zimmerman: If you value your life, give us the names of your accomplices!

William Gluck: I don’t value it that highly.

Gen. Gurko Lanen: Gluck, that was your second mistake. Men like you never realize I can rule you collectively because I can master you individually.

Guard: Who are you?

Edmund Dantes Jr.: My friend here will introduce me.

[he brandishes his sword and the fight begins]

Edmund Dantes Jr.: [to Gurko Lanen] I fear your fall will be as spectacular as your rise!