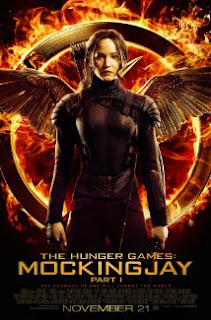 The Hunger Games: Mockingjay – Part 1 (2014) Top Movies Quotes
With the Games destroyed, Katniss Everdeen, along with Gale, Finnick and Beetee, end up in the so thought “destroyed” District 13. Under the leadership of President Coin and the advice of her friends, Katniss becomes the “Mockingjay”, the symbol of rebellion for the districts of Panem. The Hunger Games Mockingjay Part 1 starred by Jennifer Lawrence and Josh Hutcherson .

President Snow: Miss Everdeen, it is the things we love most that destroy us.

President Alma Coin: Any other demands?
Katniss Everdeen: My sister gets to keep her cat.

Katniss Everdeen: You will rescue Peeta at the earliest opportunity, or you will find another Mockingjay.

Katniss Everdeen: I have a message for President Snow: You can torture or bombed us, blasted our district to the grounds. But do you see that ? Fire Is Catching… If we burn, you burn with us!

Eddy: Are you fighting Katniss? Are you here to fight with us?
Katniss Everdeen: I am. I will.

Gale Hawthorne: Everyone has a choice Katniss, and I’d rather die than say what he just said.

Peeta Mellark: I want everyone who is watching, to lay down their weapons now.

Effie Trinket: I miss my wigs.

Beetee: Uh, let’s not fire the red ones in here.
[takes arrow from Katniss]

President Snow: Ms. Everdeen, it’s the things we love the most that destroy us. Did you think I didn’t know your friends are in the Tribute Center?

Gale Hawthorne: I don’t get it. They had their guns on us. But they let us go.

Effie Trinket: They’ll either want to kill you, kiss you, or be you.

Finnick Odair: I wish she was dead. I wish they were all dead and we were too. It would be best.

Gale Hawthorne: I’m in pain. That’s the only way I get your attention.