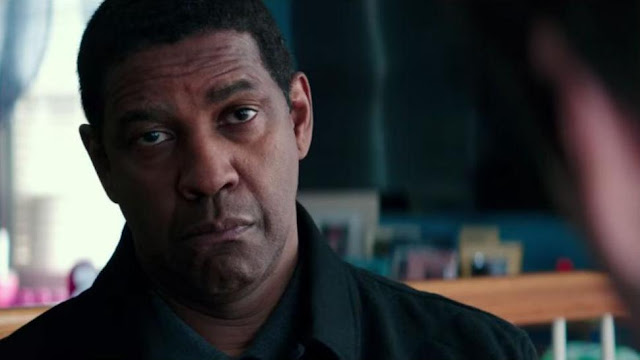 [full_width]
Robert McCall serves an unflinching justice for the exploited and oppressed, but how far will he go when that is someone he loves?
Review by Sony Pictures

Robert McCall: I’m your father. You mama forgot to tell you about me.

Robert McCall: Hey, how are you doing? I’m the driver you called to take home your girlfriend.
Man #1: Not a girlfriend, man.
Robert McCall: Oh. Credit card was invalid.
[the man gives him a card]
Man #1: Give yourself a nice tip, huh?
Robert McCall: I heard about these. I’ve never seen one before.
Man #1: Yeah, well now you have.
Robert McCall: You’re not going to ask me if she got home okay? Okay, I’m going to need anything you might have used to record what you did to her tonight.

[he goes and locks the front door and McCall sets his timer, as the man goes to attack him McCall beats three of them men]

[to the remaining guy who’s weeping in fear]

Robert McCall: Hey, how are you doing? I’m the driver you called to take home your girlfriend. The, uh, credit card was invalid.
Man #1: Come in.
Robert McCall: You’re not going to ask me if she got home okay? I’m going to need you cameras, cellphones, and anything you might have used to record what you did to her tonight.
[the man goes and locks the front door and McCall sets his timer]
Man #1: You knocked on the wrong door tonight, pops.
[McCall takes three of the men in 29 seconds]
Robert McCall: Did you ever see Star Trek?
[McCall does the Vulcan salute]
Man #2: Yes, sir.
[in tears from fear, the man also does the Vulcan salute]
Robert McCall: You make sure I get a five star rating.
Man #2: Yes, sir.
[McCall breaks the man’s fingers]
Robert McCall: Very good. Call 911.

Susan Plummer: Robert, I’ve been thinking. It’s great you’re helping out all these random people and everything, but it’s not going to fill that hole in your heart. I’m obligated to tell you these things, because I’m the only friend you’ve got.

[referring to McCall cleaning the graffiti on the wall]
Miles: Hey, you should let somebody else do this?
Robert McCall: Like who?
Miles: Anybody.
Robert McCall: You’re right. I guess anybody could do it, Miles.

Susan Plummer: Robert, I’m your only friend. It’s great you’re helping out all these random people and everything, but stay off the radar. If something happens to one of us, so I’m obligated to look into it.
Robert McCall: I thought you were retired.
Susan Plummer: Oh, I am. Just like you’re dead.

Government Agent: [to McCall] Susan worked in a dangerous world.

Robert McCall: I’ve been through the video of all the surveillance. Something else went on in that room.
Government Agent: Who did this?

[referring to Susan]
Robert McCall: Do they even know what floor she was on?

Robert McCall: Whoever we’re looking for is one of the high level assassins.

Man #3: You have no idea what you just started. You shouldn’t have gone to war with us, McCall.
Robert McCall: You got it backwards, you’re going to war with me.

Government Agent: He was your partner for seven years, Mac, it’s a mistake to go to war with him. They’re highly trained.
Robert McCall: They’re going to war with me.

Government Agent: [to McCall] There’s no coming back from this.

Robert McCall: The mistake they made was they killed my friend.

Robert McCall: They killed my friend. So I’m going to kill each and every one of them. And the only disappointment is that I only get to do it once.

Robert McCall: I punish the guilty. If you’re lucky, I give you the opportunity to do the right thing. This ain’t one of those times.

Neighborhood Resident: I’ve seeing you carrying all these books around, I figured you for some kind of teacher.
Robert McCall: I’m a high level paid former assassin.

Robert McCall: We all got to pay for our sins.

Miles: [to McCall] Who are you, Jackie Chan?