The Aftermath (2019) Movie Quotes and Trailer 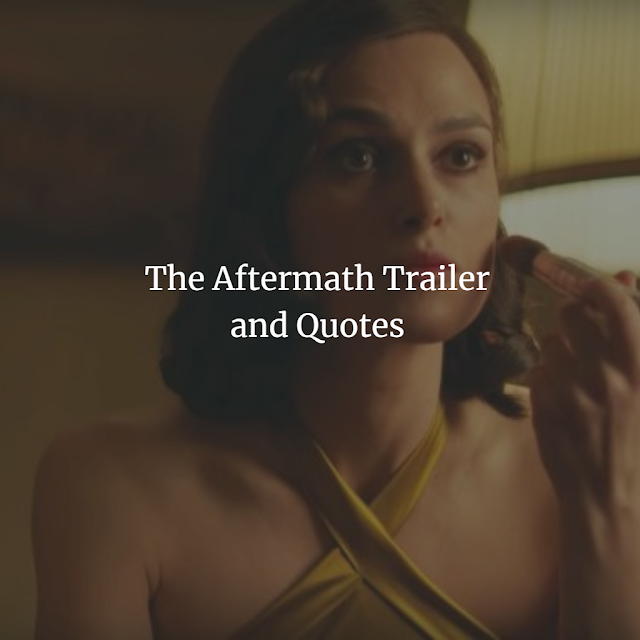 the Aftermath story: Set in postwar Germany in 1946, Rachael Morgan (Keira Knightley) arrives in the ruins of Hamburg in the bitter winter, to be reunited with her husband Lewis (Jason Clarke), a British colonel charged with rebuilding the shattered city. But as they set off for their new home, Rachael is stunned to discover that Lewis has made an unexpected decision: They will be sharing the grand house with its previous owners, a German widower (Alexander Skarsgård) and his troubled daughter. In this charged atmosphere, enmity and grief give way to passion and betrayal. Written by Fox Searchlight Pictures

[to his daughter; referring to their house which has been taken over by the British government]
Stefan Lubert: This is their house now. But we have each other.
[greeting Lewis and Rachael at his house]
Stefan Lubert: Colonel Morgan, please come inside.
Lewis Morgan: This is my wife.
[Stefan extends his hand to Rachael, but she doesn’t respond]

[to Lewis and Rachael]
Stefan Lubert: My daughter and I will stay out of your way until we move to the camp.

Lewis Morgan: What if we let them stay on?
Rachael Morgan: You mean to live with them?

[making a toast with Rachael and Stefan]
Lewis Morgan: To new beginnings.

Susan Burnham: [to Rachael] There may not be an outward show of hatred, but it’s there below the surface.

British Captain: During the war did you ever hope for a German victory? Did the bombing affect the health of you and your family?
Stefan Lubert: It affected the health of my wife.

[referring to his wife]
Stefan Lubert: She died in the firestorm.
Rachael Morgan: I’m so sorry.

Rachael Morgan: If you’re going to spy on a girl, the least you could do is pay her a compliment.
Stefan Lubert: Yes, of course.

Susan Burnham: [to Rachael] Something’s changed. Be careful, that’s all. They don’t like us.

Rachael Morgan: [to Stefan] I never thought I could be happy like this.

Stefan Lubert: [to Rachael] Come with me. This is what you wanted.

watch the trailer of the aftermath movie