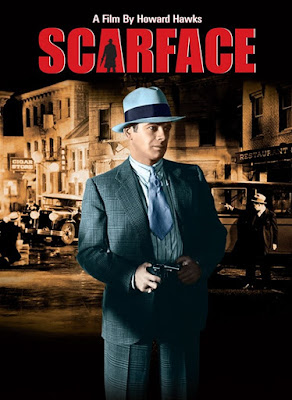 The prohibition of alcohol has led to a flourishing market of illegal liquors, dominated by organized crime. In Chicago, gangs control different parts of the city. As long as each gang limits its activities to its own district, there is peace between them. This balance of power is shattered, when the bodyguard Tony Camonte kills his boss Louis Costillo and joins another gang. Tony helps his new boss, Johnny Lovo, to expand his market share by going into districts controlled by other gangs, kill their leaders and force pubs to buy illegal beer from Lovo instead. The situation quickly develops into an all-out war between the gangs. Tony wants to be the boss of the whole city. He starts disobeying Lovo, takes over his mistress Poppy, and finally kills Lovo. Tony is now the king, but he has one weak point: his overprotection of his 18-year-old sister Cesca. He forbids her to go out and to flirt with men. When she breaks his commandments, he gets furious and forces her back home. In those situations, he loses his watchfulness, makes mistakes, and is vulnerable for attacks from other gangs and the police.

Tony Camonte: You see that?

[a sign outside the window reads: THE WORLD IS YOURS. COOK TOURS]

Tony Camonte: Someday I look at that sign and I say, “Okay, she’s mine.”

Tony Camonte: Listen, Little Boy, in this business there’s only one law you gotta follow to keep out of trouble: Do it first, do it yourself, and keep on doing it.

Tony Camonte: [smashes the window] Just changing the name on the door.

Insp. Ben Guarino: I told you you’d show up this way. Get you in a jam without a gun and you squeal like a yellow rat. Come on, climb into this

Tony Camonte: There’s only one thing that gets orders and gives orders.

Tony Camonte: And this is it. That’s how I got the south side for you, and that’s how I’m gonna get the north side for you. It’s a typewriter. I’m gonna write my name all over this town with it, in big letters!

Tony Camonte: Get out of my way Johnny, I’m gonna spit!

Tony Camonte: This fellow’s got ideas I don’t like.

Poppy: Kind of gaudy, isn’t it?

Tony Camonte: Ain’t it though? Glad you like it.

Francesca ‘Cesca’ Camonte: The police are here for you! It’s all my fault, I shouldn’t have come…

Tony Camonte: Your fault, my fault, who cares? So long as you’re here.

Tony Camonte: [Holding a Tommy gun] Lookit, Johnny, you can carry it around like a baby!

Tony Camonte: I’m not hungry. Except for you. You got something I like.

Poppy: Yeah. I’m nice with a lot of dressing. You work fast, don’t you Tony.

Poppy: Why don’t you get yourself a girl, Tony?

[Angelo is answering the phone for Tony]

Angelo: Oh, you do, huh? Listen, I come on over there, I smack you right in the teeth! I get you, you brother…

Tony Camonte: Hey! What’s the matter? That’s no way to talk. Talk nice. Tell him to state his business.

Poppy: [while sitting at a table, Tony rubs his foot on Poppy’s leg] Please, Tony! My stockings!

Tony Camonte: I get you a hunk of soap, you take a bath in it.

Tony Camonte: Hey, Cesca, you and me, huh? We’ll show them. We’ll lick them all, the North Side, the South Side! We’ll lick the whole world!

John ‘Johnny’ Lovo: What do you use to think with, an empty beer keg?

Tony Camonte: Ah, he ain’t so tough. Hanging out in a flower shop. You afraid of a guy like that?

Chief of detectives: Colorful? What color is a crawling louse? Say, listen, that’s the attitude of too many morons in this country. They think these hoodlums are some sort of demigods. What do they do about a guy like Camonte? They sentimentalize, romance, make jokes about him. They had some excuse to glorify our old Western bad men. They met in the middle of the street at high noon and waited for each other to draw. But these things sneak up and shoot a guy in the back and then run away. Colorful. Did you read what happened the other day? A car full of them chasing another down the street, broad daylight. Three kiddies playing hopscotch on the sidewalk get lead poured in their little bellies. When I think what goes on in the minds of these lice, I wanna vomit.

Managing Editor: You know, Costillo was the last of the old fashioned style gang leaders. There is a new crew coming out. And every guy that’s got money enough to buy a gun is going to try to step into his place, you see? They’ll be shooting each other like rabbits for the control of the booze business!