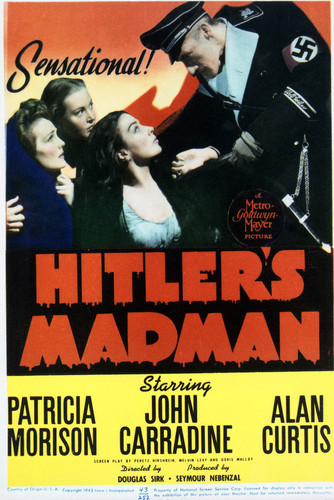 A somewhat fictionalized account of the destruction of the village of Lidice in Czechoslovakia and the events leading up to it. In 1942, the Allies parachuted a Czech resistance fighter into the area. He quickly reunites with his former girlfriend and many of the villagers who knew him from before the war.

The Nazis are evil however and under the command of Reinhardt Heydrich rule the country with an iron fist, arbitrarily arresting innocents and charging them with fictitious crimes. When Heydrich is severely wounded in a roadside attack – he dies three days later – Henrich Himmler orders the destruction of Lidice. The men are herded into a churchyard where they sing defiantly as they are shot down, the village is set aflame and the women are sent to concentration camps. The town itself is leveled.

Karel Vavra: Patience, children. Patience. You mustn’t cry Jarmilla. None of us must cry. We must stand erect with our eyes to the sun and courage in our hearts.

Nepomuk – the Hermit: You’d be a great prize for the Gestapo. They haven’t arrested anybody in three whole days!

Karel Vavra: Beyond the borders of our country, in England and far off America, millions of men are leaving their work, in factories and on the farms, to fight those who made slaves of our people. They’ve sworn to destroy Nazism and liberate all the oppressed peoples of Europe. They ask you to help them.

Herman Bauer – Burgomaster: There must be law and order. German law. German order.

Maria Bartonek – Anton’s Wife: Please, Major Bauer. Who will feed my children? They’ll starve!
Herman Bauer – Burgomaster: Your husband should have thought of that before. German trains need coal! Our housewives needed to cook our modest meals!

Professor: Inevitably, pressure creates its own counter pressure. Its very existence fertilizes the seeds of its eventual annihilation.

Professor: My lecture today is on the phenomenon of pressure as conceived by the philosophers of the seventeenth century.
Reinhardt Heydrich: Very interesting, please proceed.
Professor: One might argue, that sufficient pressure would be able to destroy its own counter pressure. But, this is not necessarily true. Force and violence destroy only bodies, never the essence of the opposing force.
Reinhardt Heydrich: I presume you refer to metaphysical matters, not to political events?
Professor: Philosophy covers the entire field of life.
Reinhardt Heydrich: Advice, Professor of Philosophy, to confine himself to the realms of the abstract.

Reinhardt Heydrich: I’m absent-minded today. I forgot the ladies entirely. Are you afraid little lady?
Clara Janek: No. I’m not afraid.
Reinhardt Heydrich: All right. Now, surely, I’m not sending ladies to a Concentration Camp. They will go to the Russian front instead of the men. But, of course, dig trenches? No, lovely one! I would never think of that. A pretty girl like you could serve so much better entertaining our courageous German soldiers.
Clara Janek: No!

Jan Hanka: You know, when I was young I thought things were simple. Right or wrong. Black or white. And as I grew older, I tried to understand the in-between. The shadows. I tried to see the other fellows’ point of view. I even imagined the Nazis might be human beings. But, this afternoon I knew I was right at first. Things are simple. They kill you. You kill them.

SS Colonel: Maybe Hess was right?
SS Colonel: Something has to be done immediately! There must be reprisals. Bloody reprisals. You must stamp out resistance at once!
SS Officer #1: What can we tell the press? They’re waiting for a statement. Shall I tell them that the assassin was a Czech?
SS Officer #2: A Czech? Preposterous! They wouldn’t dare!
SS Officer #3: It could have been a British parachuter.
SS Colonel: No! We’ll say it was a Jew. That’s always good!

SS Colonel: We must have the assassin before Himmler arrives. Do something! Take hostages! Hostages from every town and village. Hundreds of arrests are what I want. Shoot them by the hundreds! Shoot them down – every one of them!
SS Officer #1: But, what shall we tell the press?
SS Colonel: Shoot them – eh? Tell them, eh, the Reich Protector Heydrich had a slight accident. Just a few scratches. He’ll be back at his desk in the morning. That’s all gentlemen. Heil Hitler!

Heinrich Himmler: They killed Heydrich because he was too weak! They won’t say Himmler is too weak.