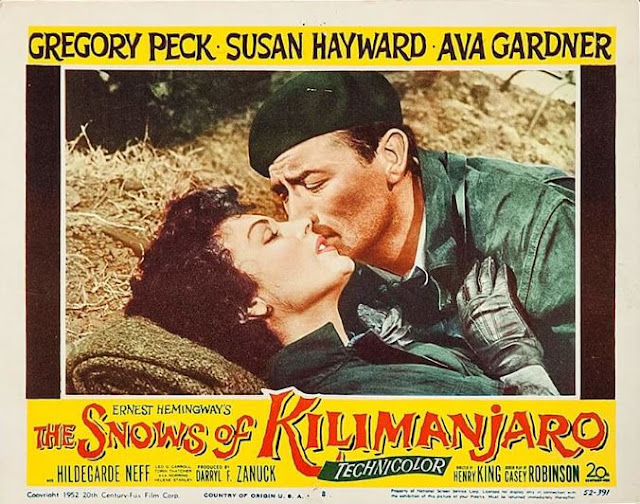 As he lay injured at the foot of Mount Kilimanjaro in Africa, writer Harry Street reflects on his life and the choices he made. He recalls his love affair with Cynthia Green who he met in Paris. They are very much in love and when they go to Africa on safari, Cynthia realizes she doesn’t share his love of the continent. She’s also pregnant and it becomes apparent to her that Harry’s lifestyle and her desire to settle down will not work.

The next woman in his life was a sculptress, Elizabeth, whom he called Countess Liz. By this time he is a quite successful writer but hasn’t completely forgotten Cynthia and tries to track her down. It leads to the end with Countess Liz. In the course of his search, he meets his current wife Helen. He’s returned to Africa to solve his life’s riddle, of whether he has taken the wrong path and if he can again find his way.

Best Quotes of The snow of Kilimanjaro

Countess Liz: Oh, I just devoured your last book!
Harry Street: [sarcastically] Well, I hope it didn’t give you a bellyache!

Uncle Bill: A man should never lose his hand at hunting.

Cynthia Green: What is the matter with me, Mr. Johnson?
Johnson: Everybody isn’t required to like Africa, you know.
Cynthia Green: I try to put on a show because I know he loves it so. But all of it – the hunting, the killing – terrifies me.
Johnson: See here, this thing that he was talking about – the excitement – call it courage. The way he feels, it is a man’s feeling, natural in a man, grows in a man, and makes him a man. Not particularly to his credit if he has it but something lacking if he hasn’t. A woman shows her courage in other ways, – many ways.

Helen: Hello, Molo, you white man’s burden, you!
Molo, African Servant: [talks in an African language]
Helen: Darling, we only got the first aid book.
Harry Street: [looking at the witch doctor] What’s he going to do, sprinkle me with monkey dust?
Helen: Darling!
Harry Street: A hair from the tail of a leopard?

Johnson: Why is it everyone who comes to Africa has to write a book about it? One silly beggar even dedicated his to me! Never came back or I’d have shot him in the pants!

Harry Street: [narrating] And there was never another time like that first time in Africa.

Harry Street: [narrating] I suppose it was the elusiveness of Liz which was her main attraction. She was something to hunt down and trap and capture. Countess Elizabeth – Frigid Liz – the semi-iceberg from the semi-tropics!

Dr. Simmons: [referring to Cynthia’s miscarriage] Do you actually mean you didn’t know about the

Countess Liz: I love you as much as I can.

Cynthia Green: [of the saxophone player] Hasn’t that African got any piety at all?