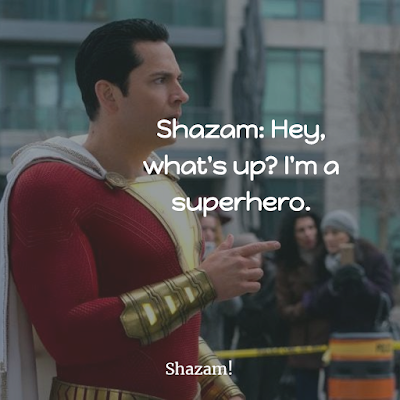 The story of Shazam: “In Winter 1974. a young Thaddeus Sivana and his older brother are driven home by their father. While playing with his magic 8 balls, Sivana is magically transported to the Rock of Eternity, where he meets a wizard, who introduced him to the mystical statues containing the spirits of the Seven Deadly Sins: Pride, Greed, Lust, Envy, Gluttony, Wrath, and Sloth. The last of a council of 7, the wizard spent centuries searching for a new champion. Put to a test to see if he is pure of heart, Sivana attempts to touch the eye of envy, failing the test. Transported back to the car, he causes a scene in which his brother hits him, and his father to crash on the ice, injured. The magic 8 ball reads “find me”. 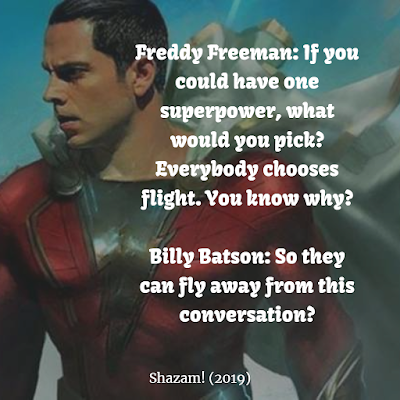 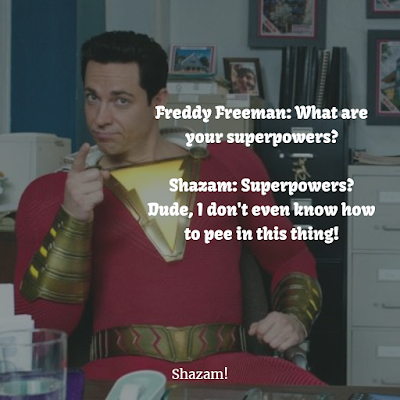 [robber shoots Shazam, the bullet ricochets off him]

Freddy Freeman: [filming on his phone] You have bullet immunity!

[they both laugh before Shazam’s expression suddenly turns serious]

[robbers fly out the window in front of a couple]

Shazam: [walking out of store with junk food] Sorry about your window… but you’re welcome for not getting robbed!

Freddy Freeman: Have a good night!

Freddy Freeman: If you could have one superpower, what would you pick? Everybody chooses flight. You know why?

Billy Batson: So they can fly away from this conversation?

The Wizard: Say my name so my powers may flow through you.

Billy Batson: But, I don’t know your name, sir.

Billy Batson: [laughs] Are you for real?

The Wizard: Say it!

The Wizard: Say my name so that my powers may flow through you.

Billy Batson: But I don’t know your name, sir.

The Wizard: SAY IT!

Freddy Freeman: [meets Billy; about his and Billy’s foster parents] They seem nice, but don’t buy it. It gets real Game of Thrones around here.

Freddy Freeman: Dude, just messing around! You look at me and you’re like, “Why so dark? You’re a disabled foster kid, you got it all!”

Freddy Freeman: What are your superpowers?

Shazam: Superpowers? Dude, I don’t even know how to pee in this thing!

The Wizard: Billy Batson, I choose you as champion.

Billy Batson: No, the name that gives me powers!

Shazam: You’re the only person I know that knows anything about this Caped Crusader stuff.

Freddy Freeman: Can I?

Shazam: Superpowers? Dude, I don’t even know how to pee in this thing!

Mister Mind: [laughs] Primitive symbols. You walking, talking monkeys with your cave drawings, you assume there’s only one means to gain magic. No, no, no, there are more ways than a mind can imagine.

Mister Mind: I named the gods, Doctor, not the other way around. Oh, what fun we’re going to have together. The Seven Realms will soon be ours.

Freddy Freeman: [to Shazam] You have super strength! Can you fly?