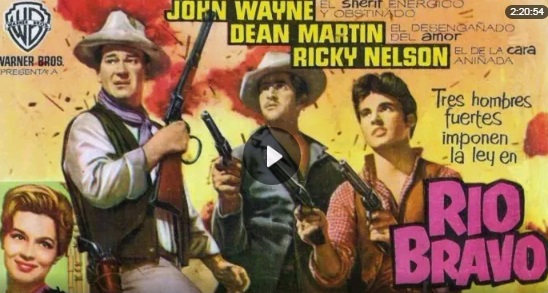 The sheriff of a small town in southwest Texas must keep custody of a murderer whose brother, a powerful rancher, is trying to help him escape. After a friend is killed trying to muster support for him, he and his deputies – a disgraced drunk and a cantankerous old cripple – must find a way to hold out against the rancher’s hired guns until the marshal arrives. In the meantime, matters are complicated by the presence of a young gunslinger – and a mysterious beauty who just came in on the last stagecoach.

Feathers: I thought you were never going to say it.

Feathers: That you love me.

Feathers: It means the same thing, you know that.

John T. Chance: You’re not as smart as your brother, Joe. He sees Stumpy here sittin’ around the corner locked in with you… and if that isn’t plain enough, I’ll tell you why. If any trouble starts around this jail before anybody can get to you you’re gonna get accidentally shot.

Stumpy: I can practical’ guarantee that!

John T. Chance: It’d be pretty close. I’d hate to have to live on the difference.

John T. Chance: [Referring to Colorado] It’s nice to see a smart kid for a change.

Stumpy: Yeah, he ain’t like the usual kid with a gun.

Dude: Wonder if he’s as good as Wheeler said?

John T. Chance: You want that gun, pick it up. I wish you would.

Pat Wheeler: A game-legged old man and a drunk. That’s all you got?

John T. Chance: That’s WHAT I got.

John T. Chance: Got any new men with you, Pat?

John T. Chance: Where’d you take him on?

John T. Chance: What does he do?

Colorado Ryan: I speak English, sheriff. If you wanna ask me.

John T. Chance: Sorry don’t get it done, Dude. That’s the second time you hit me. Don’t ever do it again.

Feathers: In case you make up your mind, I left my door open. Get a good night’s sleep.

John T. Chance: You’re not helping me any.

Stumpy: Joe doesn’t get no sugar in his coffee; he just gets water poured over the grounds.

Pat Wheeler: If I ever saw a man holdin’ a bull by the tail, you’re it.

Stumpy: You think I’ll ever get to be a sheriff?

Dude: Not unless you mind your own business.

John T. Chance: They don’t need any help with that tune.

Stumpy: What’s the matter? Is it getting through to you? Yiuk, yiuk!

John T. Chance: Going over to the hotel for a few minutes.

Pat Wheeler: I told him you were one of the best.

Colorado Ryan: Well, I’ll tell you what I’m a lot better at, Mr. Wheeler… that’s minding my own business.

[Stumpy throws some dynamite at the warehouse and Chance shoots it, causing an explosion]

Stumpy: Hey, Dude! How do ya like them apples?

John T. Chance: It’s nice to see a smart kid for a change.

[after Carlos has a quarrel with Consuelo]