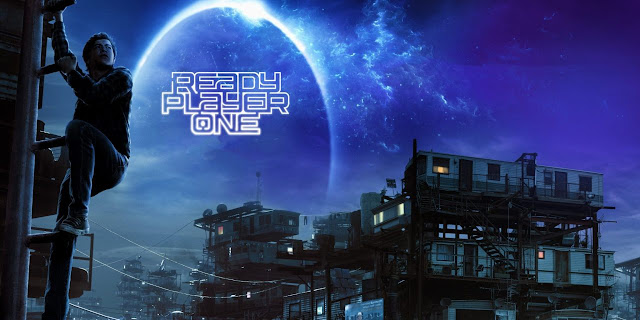 Starred by s: Tye Sheridan, Olivia Cooke and Ben Mendelsohn
Story: In the year 2045, the real world is a harsh place. The only time Wade Watts (Tye Sheridan) truly feels alive is when he escapes to the OASIS, an immersive virtual universe where most of humanity spends their days. In the OASIS, you can go anywhere, do anything, be anyone-the only limits are your own imagination. The OASIS was created by the brilliant and eccentric James Halliday (Mark Rylance), who left his immense fortune and total control of the Oasis to the winner of a three-part contest he designed to find a worthy heir. When Wade conquers the first challenge of the reality-bending treasure hunt, he and his friends-aka the High Five-are hurled into a fantastical universe of discovery and danger to save the OASIS. Written by Warner Bros.

Halliday: She wanted to go dancing, so we watched a movie.

Parzival: Some people can read War and Peace and come away thinking it’s a simple adventure story…
Art3mis: Others can read the ingredients on a chewing gum wrapper and unlock the secrets of the universe.

Halliday: I created the OASIS because I never felt at home in the real world. I just didn’t know how to connect with people there. I was afraid for all my life, right up until the day I knew my life was ending. And that was when I realized that… as terrifying and painful as reality can be, it’s also… the only place that… you can get a decent meal. Because, reality… is real.

Halliday: Maybe we should stop talking about it and start showing it. If you all want to reach under your seats, you’ll find there’s nothing there.

Aech: [Discussing Parzival’s upcoming date with Art3mis] Z, you gotta be more careful about who you meet out on the OASIS.

Parzival: Aech, Art3mis gets me. She’ll get my outfit, there’s just this connection. I mean, sometimes, we even…
Aech: Finish each other’s sentences.
Parzival: Yeah!
Aech: We have that, me and you.
Parzival: Yeah, I know. But that’s because we’re best friends, dude.
[Puts hand up for a high-five]
Aech: She could be a dude too, dude.
Parzival: Nah, come on.
Aech: I’m serious. She could actually be a 300 pound dude who lives in his momma’s basement in suburban Detroit. And her name is Chuck.
[Puts hand on Parzival’s shoulder]
Aech: Think about that.

Aech: I’ve never seen the Shining. Is it really Scary?
Sho: Uh… I had to watch it… through my fingers.

Parzival: A creator who hates his own creation. A hidden key: a leap not taken. Retrace your steps, escape your past. And the key of Jade will be yours at last.

Anorak: In the form of my avatar, Anorak the all knowing. I created three keys. Three hidden challenges test worthy traits, revealing three hidden keys to three magic gates. And those with the skill to survive these strengths will reach the end, where the prize awaits.

Anorak: The keys aren’t just laying around under a rock somewhere. I suppose you could say they’re invisible, hidden in a dark room that’s at the centre of a maze, that’s located somewhere up here.

Sorrento: Who is this ‘Parzival’ and how the hell is he winning?