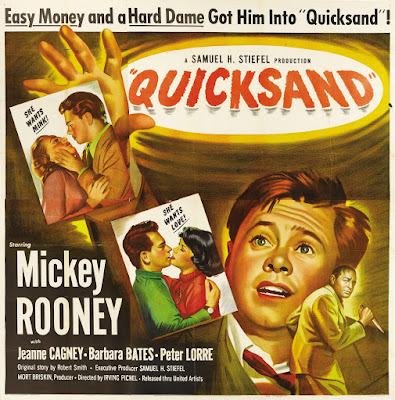 Dan Brady, an auto mechanic with Mackey Motor Co., is having lunch on Monday with a couple of buddies at the lunch counter. Dan, who spent four years in the Navy, has broken off with his girlfriend Helen because she was getting serious about marriage. A new cashier, Vera Novak, enters the restaurant and captures the young men’s attention.

Dan is persistent and asks Vera out on a date that night and she agrees. Dan doesn’t have any money and can’t borrow it from his friends and Buzz who owes him $20 can’t repay him until the next day. Dan runs the parts counter and has a cash register float he is responsible for that doesn’t get checked until Thursday. Dan decides to “borrow” $20 and pay it back before the company bookkeeper checks on Thursday. Dan’s former girlfriend Helen drops by the garage and is still interested in Dan but he blows her off. When Dan picks up Vera she wants to go window shopping downtown.

Landlady: Serves you right, you hussy!

Bar customer: Hey how does he rate all that dough?

Daniel ‘Dan’ Brady: I had the right girl all along and I didn’t know it.

Daniel ‘Dan’ Brady: I feel like I’m bein’ shoved into a corner, and if I don’t get out soon, it’ll be too late. Maybe it’s too late already!

Vera Novak: I want that coat. And I’m gonna get it.

Vera Novak: For whatever it takes.

Daniel ‘Dan’ Brady: Hey, wait a minute. You… you really do want it, don’t you?

Vera Novak: You bet I do.

Daniel ‘Dan’ Brady: [singing] There are blues, in your big brown eyes.

Daniel ‘Dan’ Brady: He’d cut my throat for a nickel.

Vera Novak: Especially those boys. They wouldn’t leave me alone.

Daniel ‘Dan’ Brady: Must have been tough.

Vera Novak: I learned to handle them after awhile.

Daniel ‘Dan’ Brady: Think you can handle me?

Vera Novak: Sure. I can handle you easy.