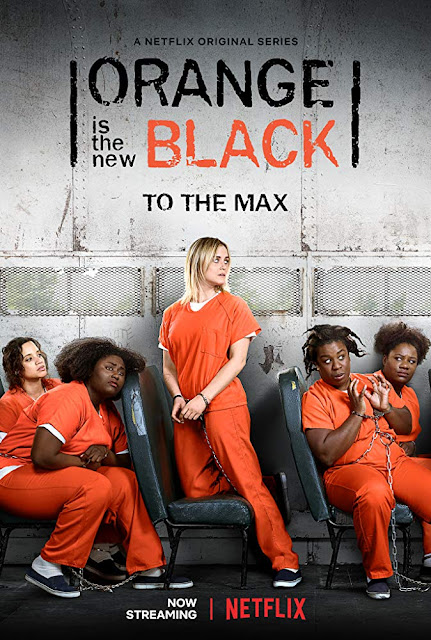 Convicted of a decade old crime of transporting drug money to an ex-girlfriend, normally law-abiding Piper Chapman is sentenced to a year and a half behind bars to face the reality of how life-changing prison can really be. 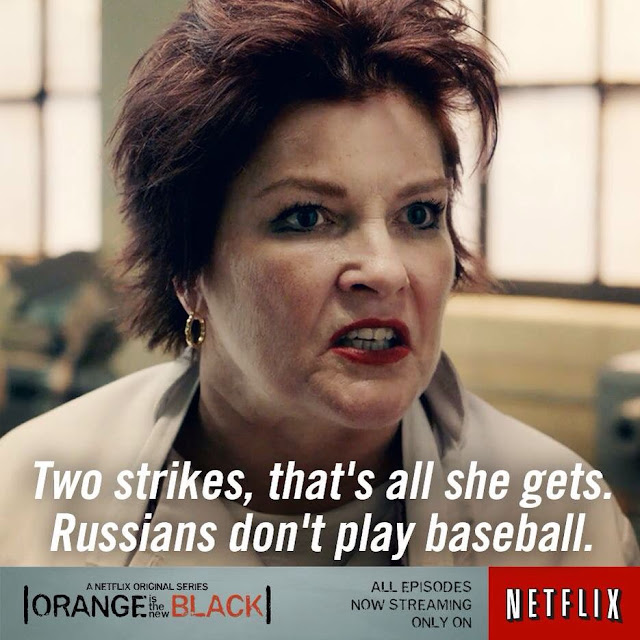 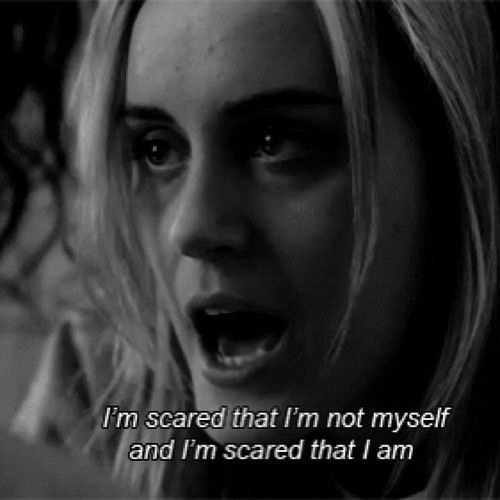 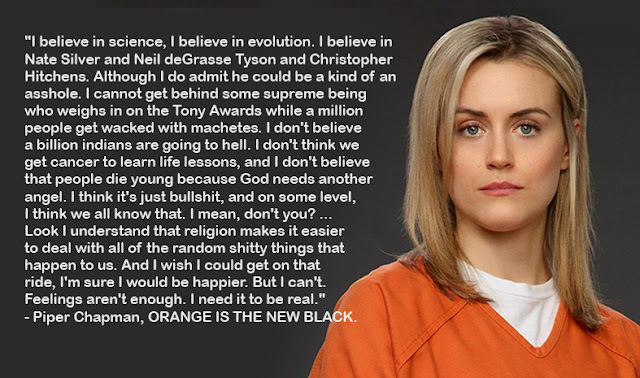 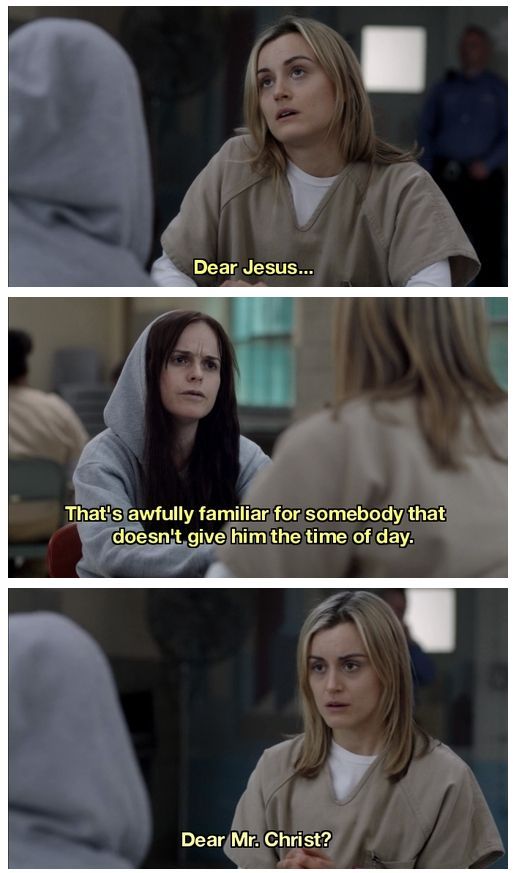 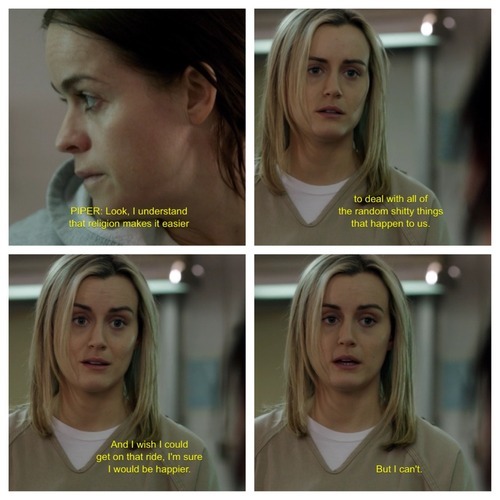 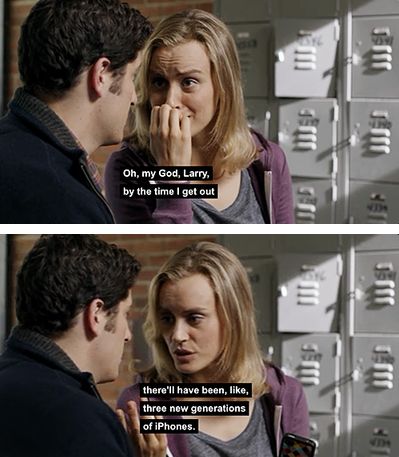 Poussey Washington: [about love] It’s just chilling, you know? Kickin’ it with somebody, talking, making mad stupid jokes. And like, not even wanting to go to sleep ‘cuz then you might be without ’em for a moment and you don’t want that.
Miss Rosa Cisneros: [after running Vee over with the prison van] Always so rude, that one.

Alex Vause: [to Piper] Are you cheating on me and Larry with Crazy Eyes? ‘Cuz there is not room for the four of us!

Galina ‘Red’ Reznikov: All I wanted was to eat the chicken that is smarter than other chickens and to absorb its power!

Yoga Jones: [about coping in prison] Work hard to make something as beautiful and meaningful as you can and when you’re done, pack it in and know it was all temporary.

Galina ‘Red’ Reznikov: The second you’re perceived as weak, you already are.

Suzanne ‘Crazy Eyes’ Warren: [to Piper] Before I met you the sun was like a yellow grape. But now, it looks like fire in the sky. Why? Because you light a fire inside me!

Lorna Morello: [to Piper] Do you hear yourself sometimes? Like, when you speak?

Tiffany ‘Pennsatucky’ Doggett: [to Piper before attacking her] I’m an angel of God. I mean, look at my dress!

George ‘Pornstache’ Mendez: No tongue-fucking in the visitation room!

Piper Chapman: I was a TA in college.
Joel Luschek: Oh, what’s that? Like “Tits” and “Ass?”
[laughs]

Big Boo: Ain’t no party like a Big Boo party!

Tiffany ‘Pennsatucky’ Doggett: You know what? Pardon my French, but you can eat my shit!

Suzanne ‘Crazy Eyes’ Warren: I don’t just like you, Piper. I got feelings. Love feelings!

Natalie Figueroa: [to Taystee about winning the mock job fair] This isn’t a contest. You do your best because that’s what you’re supposed to do. Why is it so hard for you people to understand? You’re like babies! “Where’s my present?” “Pay attention to me!” “Give me things!” “Fix the heat!” “Build a gym!” I’m not your goddamn mommy. Grow up! In acknowledgment of your hard work and success, an award of $10 will be added to your commissary fund. Enjoy.

Lorna Morello: [to Piper] You saw a chicken? Like a real live chicken in the flesh?

Piper Chapman: The food here is *disgusting*!
[everyone at the table shoots her a stern look]
Piper Chapman: [pause] What?
Nicky Nichols: Did I mention that Red runs the kitchen?
Piper Chapman: [shocked and embarrassed] Oh, shit! I’m sorry!

Cindy Hayes: [about the kitchen food] Salt! They gave us special trays. Chili-shittin’ bitches!
Poussey Washington: Man, they’re fucking with us this way ‘cuz they know our people’s predisposition for hypertension!
Tasha ‘Taystee’ Jefferson: Man, they’re tryin’ to kill us!
Janae Watson: Well, what did ya’ll expect? Don’t fuck with the cooks!

Larry Bloom: [to Piper about the prison] This is all just a big adventure with liver and Yoga Jones and racism.

Piper Chapman: [about Red] She’s issued a fucking fatwa on me!

Yoga Jones: I’m thankful for you girls who remind me every day that self-forgiveness is possible.

Larry Bloom: Why would I want a felonious, former lesbian, WASP, Shiksa, about to go to prison, to marry me?

Debbie Doggett: [to her case worker at the social security office about young Tiffany] See for yourself she ain’t right in the head. Never had all what belongs to her, poor thang. But we take what the Lord gives us…

Debbie Doggett: Anyhow, so’s I understand it, supplemental security income benefits for little bessie bugs like mine is $314 a month. Is that right?