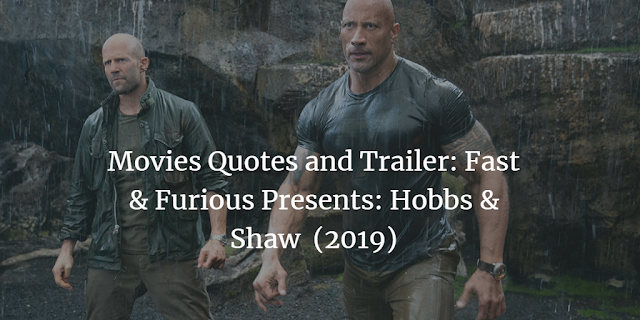 [Brixton nabs Hattie and he and his thugs scale down the skyscraper. Hobbs and Shaw decide to chase after them through ropes]

Luke Hobbs: On my three.

[Hobbs jumps and grabs his rope, but realizes that Shaw doesn’t do the same. Shaw waves at Hobbs and takes the elevator, engaging the emergency release to drop him faster than Hobbs. Hobbs then jumps and knocks out a thug by sending him crashing head-first to the elevator window]

[When Hobbs and Shaw are told to work together]

[Hobbs and Shaw point at each other]

Luke Hobbs: I’m what you call an ice-cold can of whoop-ass.

Deckard Shaw: This job requires stealth. Look at you.

Luke Hobbs: I’m trying to save the world, which, for the record, will be my fourth time. ‘Cause I’m really good at it.

[Brixton has Hobbs and Shaw chained to an electric torture device]

[Brixton gives them one shock]

Deckard Shaw: You had to open your big mouth, did ya, huh?

Luke Hobbs: Yeah, I thought it was a cool thing to say at the moment.

Luke Hobbs: Welcome to my Island, you Motha~

Hattie Shaw: Who in the hell are you?

Brixton: Shaw’s sister took something from me. A virus that could wipe out half the population. And I want it back.

[Hobbs and Shaw are on a stealth jet]

Deckard Shaw: On my three! One…

Luke Hobbs: Ha ha ha ha! Whoo! All right, you see the look on his face? You have no idea how long I’ve been waiting to do that.

[Shaw opens his parachute and gives Hobbs the double finger]

Luke Hobbs: I’m sorry to bring trouble here, Momma, but I need my brothers. This family is going to war. We’re gonna need cars… and guns.

Sefina Hobbs: I get rid of them.

Locke: Can you believe that Game of Thrones’ ending?

Luke Hobbs: I didn’t see it.

Locke: You watched the shit of it, you dirty little liar!

Luke Hobbs: [impatiently] What’s the problem? You said there was a problem.

Locke: My problem is that Jon Snow had sex with his aunt, then killed her, and nobody wants to talk about it!

Luke Hobbs: You wanna tell me just what the hell we’re dealing with here?

Luke Hobbs: When it’s the fate of the world, it becomes my business.

Luke Hobbs: We need to get off the grid.

Brixton: I’m indeed the future of the planet. I’m the necessary shot to the system. I am a human evolutionary change. Bulletproof. Superhuman.

Brixton: Hobbs and Shaw, you want a war? You’ve got one.

Deckard Shaw: I’m what you might call a champagne problem.

Brixton: Luke Hobbs and Deckard Shaw. We have got unfinished business.

Luke Hobbs: [speaking to Sam about Locke] He knows nothing, Jon Snow.

Locke: [quoting from “Game of Thrones”] A Lannister always pays his debts.