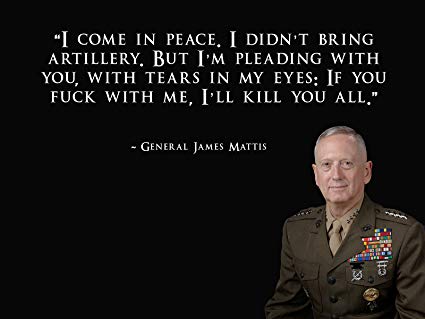 James Norman Mattis (born September 8, 1950) is a retired United States Marine Corps general who was the 26th United States Secretary of Defense, serving in the Cabinet of Donald Trump. Mattis was previously the 11th Commander of United States Central Command during the presidency of Barack Obama and was responsible for American military operations in the Middle East, Northeast Africa, and Central Asia.

“I’m honored to be considered that by Donald Trump because he also called Meryl Streep an overrated actress,” he joked. “So I guess I’m the Meryl Streep of generals and frankly that sounds pretty good to me, and you do have to admit between me and Meryl, at least we’ve had some victories.”

Combining al Qaeda’s significant fighting capabilities with a stronger focus on the administrative capabilities that might permit it to hold ground, the Islamic State copied the latter from Hezbollah’s model. Basically, Islamic State is a combined al Qaeda and Lebanese Hezbollah on steroids, destabilizing the region, dissolving borders/changing the political geography in the mid-east, and hardening political positions that make mid-east peace-building more remote by the day.
James Mattis 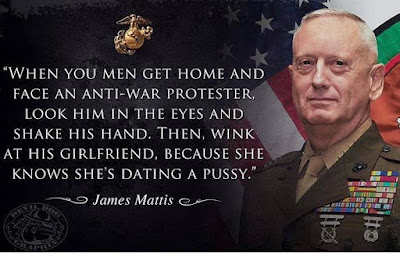 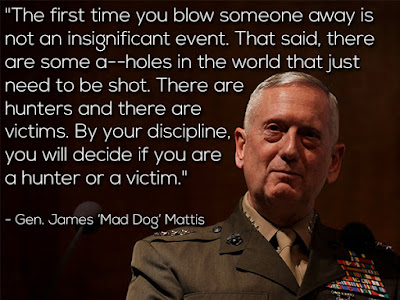 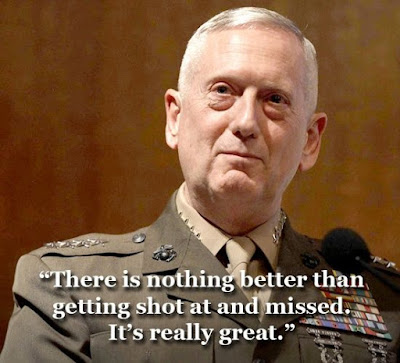 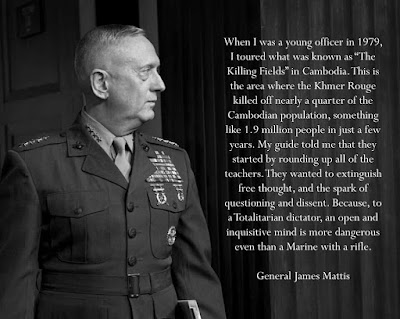 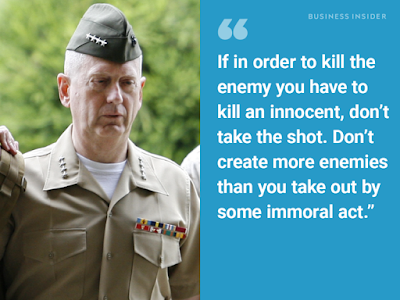 The first time you blow someone away is not an insignificant event. That said, there are some assholes in the world that just need to be shot. There are hunters and there are victims. By your discipline, cunning, obedience and alertness, you will decide if you are a hunter or a victim. It’s really a hell of a lot of fun. You’re gonna have a blast out here!

Good afternoon, Marines. Thank you for your attention so late on a Friday. I know the women of Southern California are waiting for you, so I won’t waste your time.

For all the ‘4th Generation of War’ intellectuals running around today saying that the nature of war has fundamentally changed, the tactics are wholly new, etc., I must respectfully say, ‘Not really’: Alexander the Great would not be in the least bit perplexed by the enemy that we face right now in Iraq, and our leaders going into this fight do their troops a disservice by not studying — studying, vice just reading — the men who have gone before us. We have been fighting on this planet for 5,000 years and we should take advantage of their experience. ‘Winging it’ and filling body bags as we sort out what works reminds us of the moral dictates and the cost of incompetence in our profession.

You go into Afghanistan, you got guys who slap women around for five years because they didn’t wear a veil. You know, guys like that ain’t got no manhood left anyway. So it’s a hell of a lot of fun to shoot them. Actually, it’s quite fun to fight them, you know. It’s a hell of a hoot. It’s fun to shoot some people. I’ll be right up there with you. I like brawling.

I come in peace. I didn’t bring artillery. But I’m pleading with you, with tears in my eyes: If you fuck with me, I’ll kill you a

In this age, I don’t care how tactically or operationally brilliant you are, if you cannot create harmony—even vicious harmony—on the battlefield based on trust across service lines, across coalition and national lines, and across civilian/military lines, you need to go home, because your leadership is obsolete. We have got to have officers who can create harmony across all those lines.

Message sent from Mattis on 31 December 2018, his last day as Secretary of Defense, to all members of the U.S. Department of Defense.[citation needed]

MEMORANDUM FOR THE DEPARTMENT OF DEFENSE
SUBJECT: Farewell Message
On February 1, 1865, President Lincoln sent General Ulysses S. Grant a one-sentence telegram. It read: “Let nothing which is transpiring change, hinder, or delay your military movements, or plans.” Our Department’s leadership, civilian and military, remains in the best possible hands. I am confident that each of you remains undistracted from our sworn mission to support and defend the Constitution while protecting our way of life. Our Department is proven to be at its best when the times are most difficult. So keep the faith in our country and hold fast, alongside our allies, aligned against our foes. It has been my high honor to serve at your side. May God hold you safe in the air, on land, and at sea.

Dear Mr. President,
I have been privileged to serve as our country’s 26th Secretary of Defense which has allowed me to serve alongside our men and women of the Department in defense of our citizens and our ideals.
I am proud of the progress that has been made over the past two years on some of the key goals articulated in our National Defense Strategy: putting the Department on a sounder budgetary footing, improving readiness and lethality in our forces, and reforming the Department’s business practices for greater performance. Our troops continue to provide the capabilities needed to prevail in conflict and sustain strong U.S. global influence.
One core belief I have always held is that our strength as a nation is inextricably linked to the strength of our unique and comprehensive system of alliances and partnerships. While the US remains the indispensable nation in the free world, we cannot protect our interests or serve that role effectively without maintaining strong alliances and showing respect to those allies. Like you, I have said from the beginning that the armed forces of the United States should not be the policeman of the world. Instead, we must use all tools of American power to provide for the common defense, including providing effective leadership to our alliances. NATO’s 29 democracies demonstrated that strength in their commitment to fighting alongside us following the 9-11 attack on America. The Defeat-ISIS coalition of 74 nations is further proof.
Similarly, I believe we must be resolute and unambiguous in our approach to those countries whose strategic interests are increasingly in tension with ours. It is clear that China and Russia, for example, want to shape a world consistent with their authoritarian model – gaining veto authority over other nations’ economic, diplomatic, and security decisions – to promote their own interests at the expense of their neighbors, America, and our allies. That is why we must use all the tools of American power to provide for the common defense.
My views on treating allies with respect and also being clear-eyed about both malign actors and strategic competitors are strongly held and informed by over four decades of immersion in these issues. We must do everything possible to advance an international order that is most conducive to our security, prosperity, and values, and we are strengthened in this effort by the solidarity of our alliances.
Because you have the right to have a Secretary of Defense whose views are better aligned with yours on these and other subjects, I believe it is right for me to step down from my position. The end date for my tenure is February 28, 2019, a date that should allow sufficient time for a successor to be nominated and confirmed as well as to make sure the Department’s interests are properly articulated and protected at upcoming events to include Congressional posture hearings and the NATO Defense Ministerial meeting in February. Further, that a full transition to a new Secretary of Defense occurs well in advance of the transition of Chairman of the Joint Chiefs of Staff in September in order to ensure stability Within the Department.
I pledge my full effort to a smooth transition that ensures the needs and interests of the 2.15 million Service Members and 732,079 DoD civilians receive undistracted attention of the Department at all times so that they can fulfill their critical, round-the-clock mission to protect the American people.
I very much appreciate this opportunity to serve the nation and our men and women in uniform.