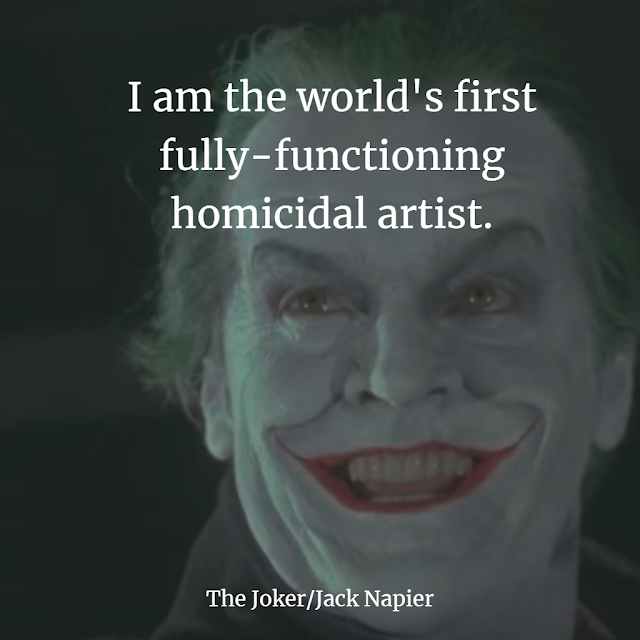 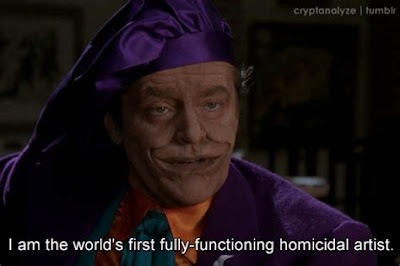 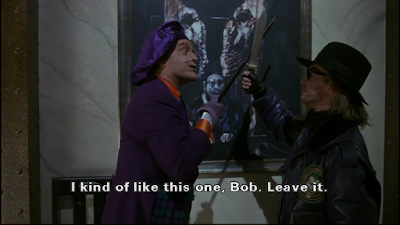 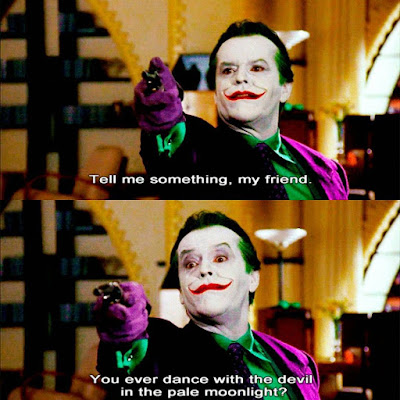 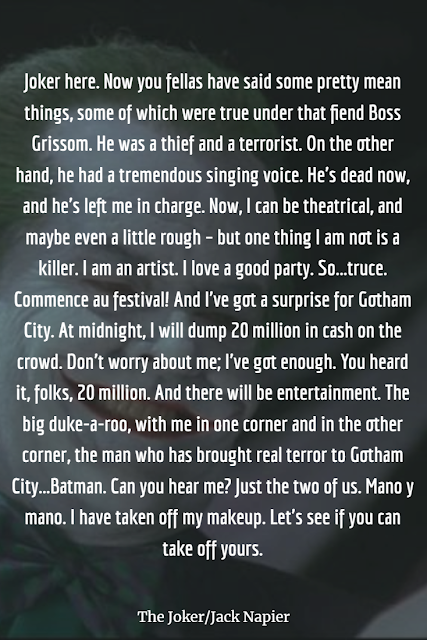 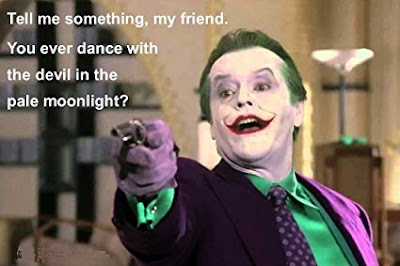 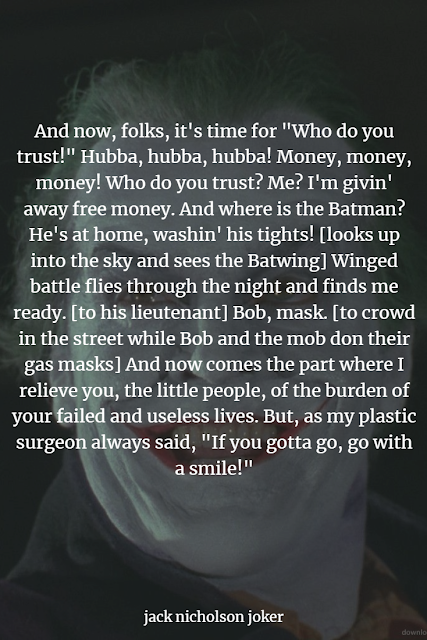 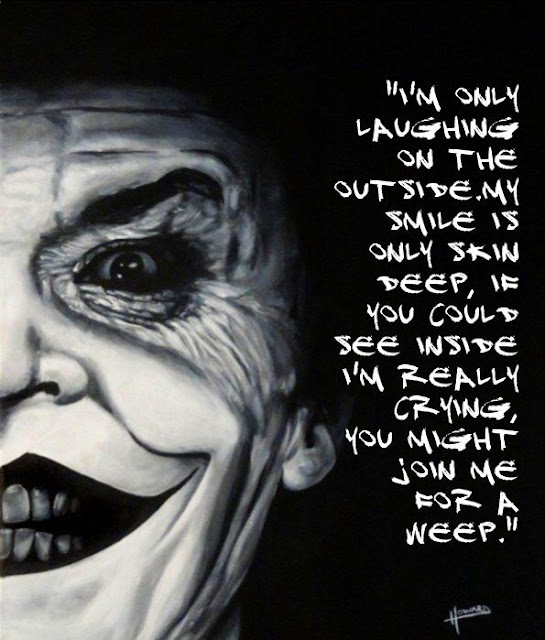 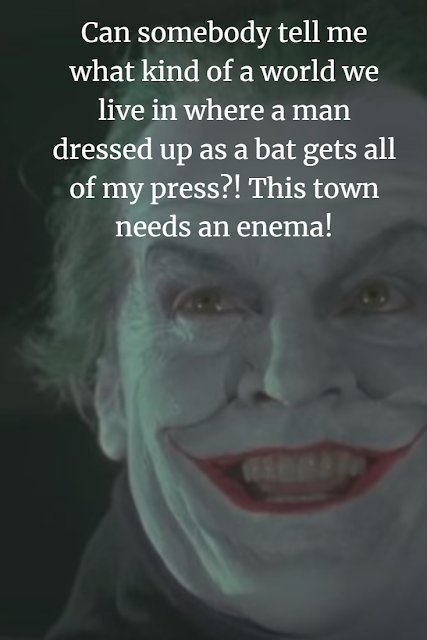 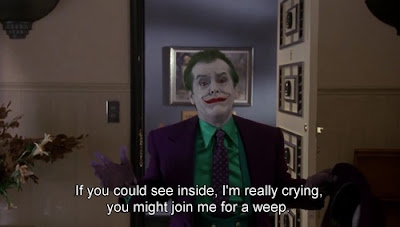 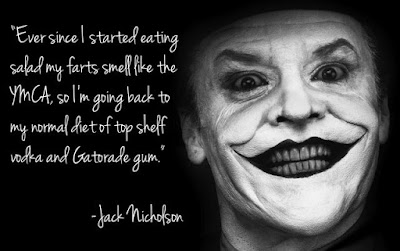 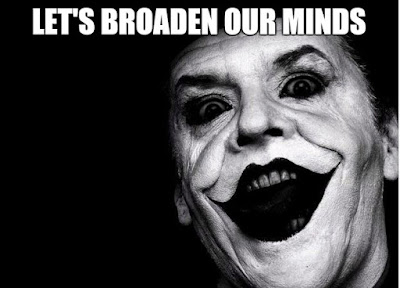 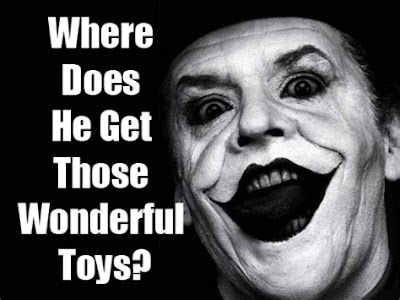 Your pals, uh…. they’re not bad people. Maybe we, uh, like, oughtta give them a couple of days to think things over. No? Grease ’em now? Well… OK, so you are a vicious bastard, Rotelli, and…. [tightens Rotelli’s charred tie]… I’m glad you’re dead! [laughs maniacally] I’m glad you’re dead! [continues to repeat the phrase and laugh]

The pen…. is truly mightier than the sword!
Can somebody tell me what kind of a world we live in where a man dressed up as a bat gets all of my press?! This town needs an enema!

[in TV ad] New and improved Joker products! With my new secret ingredient–“Smylex!” Now, let’s go over to our blind taste test. Uh-oh. He doesn’t look happy. He’s been using Brand X! But with this new and improved Joker brand… I get a grin again and again! That luscious tan! Those ruby lips! And hair color so natural that only your undertaker knows for sure! I know what you’re saying: “Where can I get these fine new items?” Well, that’s the gag. Chances are that you’ve bought ’em already! [laughs] So remember, put on a happy face!

Joker here. Now you fellas have said some pretty mean things, some of which were true under that fiend Boss Grissom. He was a thief and a terrorist. On the other hand, he had a tremendous singing voice. He’s dead now, and he’s left me in charge. Now, I can be theatrical, and maybe even a little rough – but one thing I am not is a killer. I am an artist. I love a good party. So…truce. Commence at the festival! And I’ve got a surprise for Gotham City. At midnight, I will dump 20 million in cash on the crowd. Don’t worry about me; I’ve got enough. You heard it, folks, 20 million. And there will be entertainment. The big duke-a-roo, with me in one corner and in the other corner, the man who has brought real terror to Gotham City…Batman. Can you hear me? Just the two of us. Mano y Mano. I have taken off my makeup. Let’s see if you can take off yours.

And now, folks, it’s time for “Who do you trust!” Hubba, hubba, hubba! Money, money, money! Who do you trust? Me? I’m givin’ away free money. And where is the Batman? He’s at home, washin’ his tights! [looks up into the sky and sees the Batwing] Winged battle flies through the night and finds me ready. [to his lieutenant] Bob, mask. [to crowd in the street while Bob and the mob don their gas masks] And now comes the part where I relieve you, the little people, of the burden of your failed and useless lives. But, as my plastic surgeon always said, “If you gotta go, go with a smile!”
[last words] Sometimes I just kill myself!

You ever dance with the devil in the pale moonlight?

Ah. Beauty and the beast. Course if anyone calls you beast, I’ll rip their lungs out.
I am the world’s first fully-functioning homicidal artist.
I’m only laughing on the outside. My smile is just skin-deep. If you could see inside I’m really crying. you might join me for a weep. [laughing]