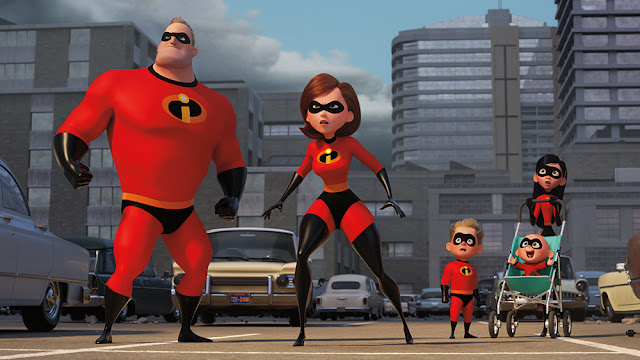 Plot : While the Parr family has accepted its collective calling as superheroes, the fact remains that their special heroism is still illegal. After they are arrested after unsuccessfully trying to stop the Under miner, their future seems bleak. However, the wealthy Deavor siblings of Devtech offer new hope with a bold project to rehabilitate the public image and legal status of Supers, with Elastigirl being assigned on point to be the shining example. Now having agreed for now to stay at home to care of the kids, Mr. Incredible finds domestic life a daunting challenge, especially with baby Jack-Jack’s newly emerged powers making him almost impossible to manage. However, Elastigirl soon has her own concerns dealing with the menace of a new super villain, Screen slaver, who is wreaking havoc with his mind control abilities. Now, Elastigirl must solve the mystery of this enemy, who has malevolent designs on the world with the Parr family and friends key targets of this evil. Written by Kenneth Chisholm

Edna Mode: [to the tired Bob, who is holding Jack-Jack] Done properly, parenting is a heroic act… done properly.

Dashiell ‘Dash’ Parr: [as Bob helps him with his math] That’s… not the way you’re supposed to do it, Dad.

[turns his book around]

Bob Parr: Suit up! It might get weird.
Lucius Best: I’ll be there, ASAP.
Honey: Where are you going ASAP? You better be back ASAP!

Helen Parr: [to Bob] You know it’s crazy, right? To help my family, I gotta leave it to fix the law, I gotta break it.

Bob Parr: You’ve got to, so our kids can have that choice.

Violet and Dash demand to know why Bob hasn’t told Helen about Jack-Jack’s powers
Bob Parr: Because I’m formulating, okay! I’m taking in information! I’m processing! I’m doing the math, I’m fixing the boyfriend, and keeping the baby from turning into a flaming monster! How do I do it? By rolling with the punches, baby! I eat thunder and crap lightening, okay? Because I’m Mr. Incredible! Not “Mr. So-So” or “Mr. Mediocre Guy”! Mr. Incredible!
[Violet and Dash are silent for a moment after Bob’s rant]
Violet Parr: We should call Lucius.
Bob Parr: No, I can handle it! There’s no way I’m gonna…
[yells]
Bob Parr: [Jack-Jack goes flying through the walls, catapulting himself towards the pool in the backyard, and Bob runs after him to catch him]
Violet Parr: I’m calling Lucius.

Rick Dicker: If you wanna get out of the hole, first you gotta put down the shovel.

Bob Parr: Hey! You did this, can you UN-do it?
Krushauer: You want me to… UN-crush?
Bob Parr: What, no one’s ever asked for that?
Krushauer: No! What you want un-crush for?
Bob Parr: So I can- Never mind.
[He starts running off]
Krushauer: What if I tell you to un-punch someone, what you do then?

Screenslaver: The Screenslaver interrupts this program for an important announcement. Don’t bother watching the rest. Elastigirl doesn’t save the day; she only postpones her defeat. And while she postpones her defeat, you eat chips and watch her invert problems that you are too lazy to deal with. Superheroes are part of a brainless desire to replace true experience with simulation. You don’t talk, you watch talk shows. You don’t play games, you watch game shows. Travel, relationships, risk; every meaningful experience must be packaged and delivered to you to watch at a distance so that you can remain ever-sheltered, ever-passive, ever-ravenous consumers who can’t free themselves to rise from their couches to break a sweat, never anticipate new life. You want superheroes to protect you, and make yourselves ever more powerless in the process. Well, you tell yourselves you’re being “looked after”. That you’re inches from being served and your rights are being upheld. So that the system can keep stealing from you, smiling at you all the while. Go ahead, send your supers to stop me. Grab your snacks, watch your screens, and see what happens. You are no longer in control. I am.

Bob Parr: [to Lucius over the phone] Suit up. It might get weird.
Lucius Best: I’ll be there ASAP.
[goes to get his super suit]
Honey: Where you goin’ ASAP? You better be back ASAP!

Bob Parr: Why would they change math?

Helen Parr: [to Bob over the phone] I couldn’t have done this if you hadn’t taken over so well.

Winston Deavor: It’s time to make some wrong things right! Help me bring supers back into the sunlight. We need to change people’s perceptions about superheroes, and Elastigirl is our best play.
Bob Parr: Better than… me?
[Elastigirl clears her throat and gives Mr. Incredible a glare]

Dashiell ‘Dash’ Parr: [enters the house Winston is letting them live in with Bob, Helen, Violet, and Jack-Jack] Whoa! I LIKE Mom’s new job!

Screenslaver: Supers are no longer in control… I am.

Bob Parr: I used to know what’s right, but I’m not sure anymore. I just… wanna be a good dad.
Violet Parr: You’re not good… you’re super.

Evelyn Deavor: The fact that you saved me doesn’t make you right.
Helen Parr: But it does make you alive.

Violet Parr: [the Parr family sits down at the dinner table; Dash reaches for food] Did you wash your hands?
[Dash uses his superhuman speed to run and wash his hands]
Violet Parr: With soap?
[Dash runs back and uses soap]
Violet Parr: Did you dry them?
[Dash shakes his hands off and reaches for the food, eating it]
Dashiell ‘Dash’ Parr: [Helen puts his Chinese food in front of him; he looks in it] What? Is this ALL vegetables? Who ordered all vegetables?
Helen Parr: I did.
[puts the food on his plate]
Violet Parr: So, are we going to talk about it?
Bob Parr: What?
Violet Parr: The elephant in the room.
Bob Parr: What elephant?
Violet Parr: Mom’s new job.