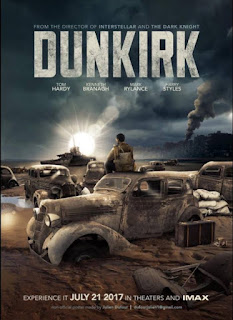 Evacuation of Allied soldiers from Belgium, the British Empire, and France, who were cut off and surrounded by the German army from the beaches and harbor of Dunkirk, France, between May 26- June 04, 1940, during Battle of France in World War II. Written by Harvey

Mr. Dawson: Men my age dictate this war. Why should we be allowed to send our children to fight it?

Captain Winnant: What do you see?
Commander Bolton: Home.
Shivering Soldier: [Referring to George] Is he okay?Peter: Yeah.

Tommy: Wars are not won by evacuation.
Commander Bolton: I’d rather fight waves than dive-bombers.

Commander Bolton: The enemy tanks have stopped.
Captain Winnant: Why? Why waste precious tanks when they can pick us off from the air like a fish in a barrel?

Collins: Dunkirk’s so far, why couldn’t they load at Calais?
Radio Communication: The enemy had something to say about it.
9 of 9 found this interesting | Share this
Commander Bolton: The tide’s turning now.

Commander Bolton: The bodies are coming back.

Peter: [when pulling a survivor up from the water] Good day.

Alex: You don’t speak English English
[pointing at Gibson]
Alex: , and if he does it’s with an accent thicker than sauerkraut sauce.