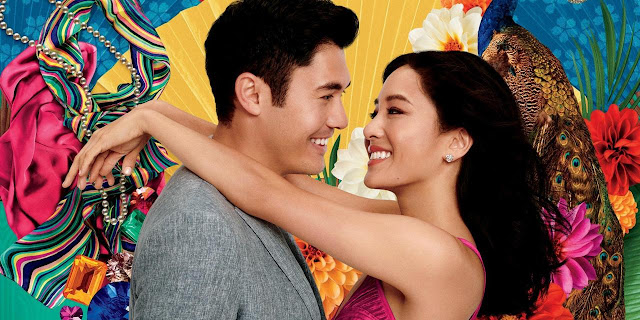 Plot : The story follows native New Yorker Rachel Chu (Wu) as she accompanies her longtime boyfriend, Nick Young (Golding), to his best friend’s wedding in Singapore. Excited about visiting Asia for the first time but nervous about meeting Nick’s family, Rachel is unprepared to learn that Nick has neglected to mention a few key details about his life. It turns out that he is not only the scion of one of the country’s wealthiest families but also one of its most sought-after bachelors. Being on Nick’s arm puts a target on Rachel’s back, with jealous socialites and, worse, Nick’s own disapproving mother (Yeoh) taking aim. And it soon becomes clear that while money can’t buy love, it can definitely complicate things.

Nick Young: Rache, we’ve been dating for over a year now, and I think it’s about time people met my beautiful girlfriend. What about us taking an adventure East?
Rachel Chu: Like Queen?
Nick Young: Singapore, Colin’s wedding. Don’t you want to meet my family?

Rachel Chu: I hardly know anything about them. Every time I bring them up, Nick changes the subject.
Kerry Chu: Maybe his parents are poor and he has to send them money.

[at the airport; to Nick]
Airport Staff: They’ll take your bags and you can check into first class.

[referring to their first class flight]
Rachel Chu: Nick, we can’t afford this.

Rachel Chu: So your family is rich?
Nick Young: We’re comfortable.
Rachel Chu: That is exactly what a super rich person would say.

Goh Peik Lin: The Nick you’re dating is Nick Young?
Rachel Chu: Yeah, do you guys know him or something?
Goh Wye Mun: Hell, yeah. They’re just the biggest developers in all of Singapore.

Rachel Chu: These people aren’t just rich, they’re crazy rich.
Rachel Chu: You know, you should have told me that you were like the Prince William of Asia.
Nick Young: That’s ridiculous. Much more of a Harry.
Nick Young: Mum, this is Rachel Chu.
[as Rachel goes to drink from the bowl of liquid that’s being offered to her
Nick Young: No, no, no. Those are for your fingers.
Eleanor Young: [to Rachel] I chose to raise a family. For me, it was a privilege. But for you, you may think it’s old-fashioned.

Rachel Chu: Don’t you want Nick to be happy?
Eleanor Young: I know you’re not what Nick needs.

Rachel Chu: [to Eleanor] If Nick chose me, he would lose his family. And if he chose his family, he might spend the rest of his life resenting you.

Goh Peik Lin: [to Rachel] She just think you’re some like unrefined banana. Yellow on the outside, and white on the inside.

Rachel Chu: She’s like trying to play a game of chicken with me, thinking I’m going to swerve like a chicken.
Goh Peik Lin: But you can’t swerve, you’re going to roll off and be like…
Rachel Chu: Bok-bok, bitch.
Goh Peik Lin: Okay, maybe like not as aggressive.

Nick Young: I met a girl, I fell in love and I want to marry her.
Colin Khoo: You’re Nicholas Young, you’re untouchable. But Rachel’s not.

Eleanor Young: [to Rachel] I know this much, you will never be enough.

Oliver T’sien: [to Rachel] You know, it’s about time someone stood up to Auntie Eleanor. Well, you, not be. Oh, God. She can’t know I was over here.

Nick Young: [to Rachel] Ever since I can remember my family has been my whole life.

Goh Peik Lin: [to Rachel] You nasty. You’re kind of nasty. You got nastier.
What do you think of Crazy Rich Asians quotes? Let us know what you think in the comments below as we’d love to know.