Skip to content
City of God Top Quotes and Trailer

Brazil, 1960s, City of God. The Tender Trio robs motels and gas trucks. Younger kids watch and learn well…too well. 1970s: Li’l Zé has prospered very well and owns the city. He causes violence and fear as he wipes out rival gangs without mercy. His best friend Bené is the only one to keep him on the good side of sanity. Rocket has watched these two gain power for years, and he wants no part of it. Yet he keeps getting swept up in the madness. All he wants to do is take pictures. 1980s: Things are out of control between the last two remaining gangs…will it ever end? Welcome to the City of God. 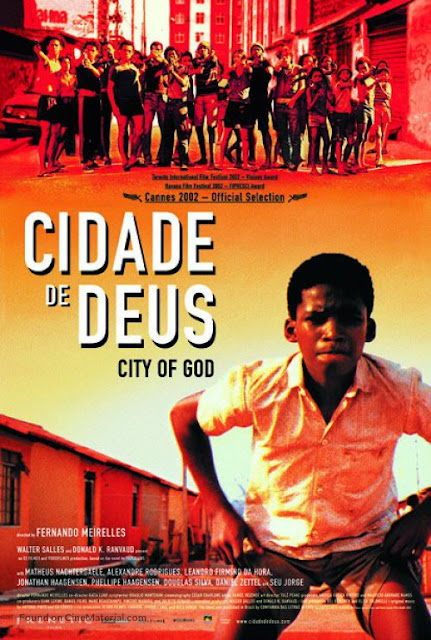 Buscapé: It was like a message from God: “Honesty doesn’t pay, sucker.”

Zé Pequeno: Can you read?
Gang Member: I can read only the pictures.

Buscapé: You need more than guts to be a good gangster. You need ideas.

Sandro Cenoura: Have you lost your mind? You are just a kid!
Filé-com-Fritas – Steak and Fries: A kid? I smoke, I snort. I’ve killed and robbed. I’m a man.

Zé Pequeno: Where do you want to take the shot? In the hand or in the foot?

Barbantinho Adulto – Older Stringy: Why return to the City of God, where God forgets about you?

Cabeleira: Hey, Bernice. Listen, I’ve got something real important to say. Tell me, you ever heard of love at first sight?
Berenice: Sure, but hoods don’t fall in love, they just get horny.
Cabeleira: C’mon, you cut everything I say to pieces.
Berenice: Hoods don’t talk, they just vomit words.
Cabeleira: Jesus, I’m gonna stop wasting my saliva on you, you sure ain’t easy.
Berenice: Hoods never stop, they just take a break.
Cabeleira: Jeez, Bernice, talking about love with you is pretty complicated, isn’t it?
Berenice: Love, you gotta be kidding. You’re just leading me on.
Cabeleira: But it’s just that this jerk here loves you.

[after seen his pictures printed in the front page of the news by mistake]
Buscapé: Fuck… I’m dead!

[cut to slum]
Zé Pequeno: What’s the name of that friend of yours who took this pictures?
Thiago – Tiago: Buscapé.
[Enjoying the pictures]
Zé Pequeno: Buscapé! The guy is good!

Buscapé Criança – Young Rocket: Sun is for everyone, beach for a few.

Buscapé: [after Dadinho kills many people in a motel] That night, Dadinho killed his dream of kill.
Boy 2: If you wanna be a dealer, you gotta start as a delivery boy, see?
Boy 1: This delivery boy business is real bullshit. The time it takes being a delivery boy, then security and then manager, is way too long.
Boy 2: What you gonna do? You’ve gotta wait for them to die…
Boy 1: No way! I’ll do it just like Pequeno did: you gotta whack everyone and that’s it!

Buscapé: What should have been swift revenge turned into an all out war. The City of God was divided. You couldn’t go from one section the other, not even to visit a relative. The cops considered anyone living in the slum a hoodlum. People got used to living in Vietnam, and more and more volunteers signed up to die.

Zé Pequeno: [after snorting a line and seeing Knockout Ned’s photograph in one of the center pages of a newspaper] Motherfucker!I’m the boss around here but he gets his picture in the paper! Have you found my photo in there?

[first lines]
Zé Pequeno: Whoa, the chicken ran away. Get that chicken, dude!