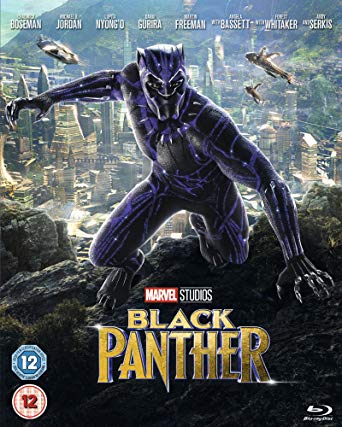 Plot : After the events of Captain America: Civil War, Prince T’Challa returns home to the reclusive, technologically advanced African nation of Wakanda to serve as his country’s new king. However, T’Challa soon finds that he is challenged for the throne from factions within his own country. When two foes conspire to destroy Wakanda, the hero known as Black Panther must team up with C.I.A. agent Everett K. Ross and members of the Dora Milaje, Wakandan special forces, to prevent Wakanda from being dragged into a world war. Written by Editor

M’Baku: If you say one more word, I’ll feed you to my children!
[Ross shuts up, beat]
M’Baku: I’m kidding. We’re vegetarians.

T’Challa: Wakanda will no longer watch from the shadows. We can not. We must not. We will work to be an example of how we, as brothers and sisters on this earth, should treat each other. Now, more than ever, the illusions of division threaten our very existence. We all know the truth: more connects us than separates us. But in times of crisis the wise build bridges, while the foolish build barriers. We must find a way to look after one another, as if we were one single tribe.

T’Challa: We can still heal you…
Erik Killmonger: Why, so you can lock me up? Nah. Just bury me in the ocean with my ancestors who jumped from ships, ’cause they knew death was better than bondage.

Everett K. Ross: [after he wakes up] Is this Wakanda?
Shuri: [sarcastically] No, it’s Kansas.

Shuri: Did he freeze?
Okoye: Like an antelope in headlights.

Okoye: Just don’t freeze when you see her.
T’Challa: What are taking about? I never freeze.

King T’Chaka: [to T’Challa] You’re a good man with a good heart. And it’s hard for a good man to be king.

Nakia: You can’t let your father’s mistakes define who you are. You get to decide what kind of king you are going to be.

W’Kabi: You would kill me my love?
Okoye: For Wakanda? Without Question.

T’Challa: I never yielded! And as you can see, I am not dead!

Erik Killmonger: I’ve waited my whole life for this. The world’s going to start over. I’MA BURN IT ALL!

[first lines]
N’Jadaka: Baba…
N’Jobu: Yes, my son.
N’Jadaka: Tell me a story.
N’Jobu: Which one?
N’Jadaka: The story of home.
N’Jobu: Millions of years ago, a meteorite made of vibranium, the strongest substance in the universe, struck the continent of Africa, affecting the plant life around it. And when the time of man came, five tribes settled on it and called it Wakanda. The tribes lived in constant war with each other until a warrior shaman received a vision from the Panther Goddess Bast, who led him to the Heart-Shaped Herb, a plant that granted him superhuman strength, speed and instincts. The warrior became king and the first Black Panther, the protector of Wakanda. Four tribes agreed to live under the king’s rule, but the Jabari Tribe isolated themselves in the mountains. The Wakandans used vibranium to develop technology more advanced than any other nation. But as Wakanda thrived, the world around it descended further into chaos. To keep vibranium safe, the Wakandans vowed to hide in plain sight, keeping the truth of their power from the outside world.
N’Jadaka: And we still hide, Baba?
N’Jobu: Yes.
N’Jadaka: Why?

T’Challa: What happens now determines what happens to the rest of the world.

Everett K. Ross: Does she speak English?
Okoye: When she wants to.

Ulysses Klaue: What do you actually know about Wakanda?
Everett K. Ross: Um… Shepherds. Textiles. Cool outfits.
Ulysses Klaue: It’s all a front. Explorers searched for it for centuries. El Dorado. The Golden City. They thought they could find it in South America, but it was in Africa the whole time. A technological marvel. All because it was built on a mound of the most valuable metal known to man. Isipho, they call it. “The gift”.

[Shuri drives a car and runs over someone]
Shuri: What was that?
T’Challa: Don’t worry about it, you’re doing fine!

Everett K. Ross: [to T’Challa] I have seen gods fly. I have seen men build weapons that I couldn’t even imagine. I have seen aliens drop from the sky. But I have never seen anything like this. How much more are you hiding?

T’Challa: My suit is good.
Shuri: Old tech. Functional, but old. “People are shooting at me – wait, let me put my helmet on!”

Shuri: [as a fatally wounded Everett Ross is wheeled into her lab] Great! Another broken white boy for us to fix.
Okoye: Wakanda forever!

Everett K. Ross: [T’Challa leaves a craps table] Hey, you won!
Thirsty Gambler: You know what? I’m just going to take these chips and set them over here.

Everett K. Ross: Why don’t you give me the name of your supplier and I’ll ask them?
Ulysses Klaue: He’s right outside. Why don’t you ask him yourself?

Erik Killmonger: I lived my entire life waiting for this moment. I trained, I lied, I killed just to get here. I killed in America, Afghanistan, Iraq… I took life from my own brothers and sisters right here on this continent! And all this death just so I could kill you.

Shuri: [about T’Challa’s sandals] What are those?

Shuri: This corset is really uncomfortable, so can we all just wrap it up and go home?

N’Jobu: No tears for me, son?
Erik Killmonger: People die every day. That’s just part of life around here.

M’Baku: Witness the strength of the Jabari… first-hand!
[picks up W’Kabi and throws him into the field surrounding the Wakandans]

Shuri: It’s like riding a hover-bike.
Everett K. Ross: You have hover-bikes?

Okoye: [to Killmonger] You are so full of hatred, you will never be a true king!

T’Challa: [on saving Ross] I will not abandon someone to die, when I have the means to save his life.

Okoye: I am loyal to that throne, no matter WHO sits on it.

T’Challa: You will destroy the world, Wakanda included!
Erik Killmonger: The world took everything away from me! Everything I ever loved! But I’ma make sure we’re even. I’ma track down anyone who would even think of being loyal to you! And I’ma put their ass in the dirt, right next to Zuri!

T’Challa: What do you want?
Erik Killmonger: I want the throne!

[in Oakland]
Shuri: When you said you’d bring me to California when I was a kid, I thought you meant Coachella, or Disneyland. Where are we?
T’Challa: This is the building where our uncle lived, where our father killed him.
Shuri: [sees a condemnation notice] They’re tearing it down. Good.
T’Challa: They are not tearing it down, not anymore. I bought the building. And that one… and that one.

post-credits scene: in a small village at Wakanda, Bucky comes out of a hut. He looks around. A group of children call him “White Wolf”. He approaches Shuri]
Shuri: Good morning, Sergeant Barnes.
Bucky Barnes: Bucky.
Shuri: How are you feeling?
Bucky Barnes: Good.
[pause]
Bucky Barnes: Thank you.
Shuri: Come.
[Shuri starts walking away]
Shuri: Much more for you to learn.
[Bucky pauses for a moment, looking at the landscape, then follows Shuri

Erik Killmonger: When I tell you to do something, I mean that shit.

T’Challa: How are you feeling today, Mama?
Ramonda: Proud. Your father and I would talk about this day all the time. He is with us. And it is your time to be king.

Nakia: It is my duty to fight for who I… for the things I love.

W’Kabi: You let the refugees in, you let in all their problems.

Ulysses Klaue: [blasts a safe and sends the money falling everywhere] I made it rain!

Nakia: [to Ross] The king is dead. Come with me if you don’t want to join him!

King T’Chaka: [to his brother] Did you think you were the only spy we sent to the States?
[Zuri reveals himself]

T’Challa: Baba…
[falls to his knees]
King T’Chaka: Stand up! You are a king!

Everett K. Ross: My intel reports that the chunk of vibranium you took was all that Wakanda had.
Ulysses Klaue: [laughs, then gets serious] ALL OF IT? I took a tiny piece of it! They have a MOUNTAIN of the stuff! And they haven’t even scratched the surface.

Everett K. Ross: [to Klaw] That is quite the entourage!

[Killmonger is going to kill T’Challa]
Zuri: I had your father killed! Take me.
Erik Killmonger: I’ma take you both, Uncle James!
[kills Zuri]
T’Challa: NOOOO!

[TChalla confronts his ancestors in the ancestral plane]
T’Challa: You were wrong – all of you were wrong – to turn your backs on the rest of the world! We let the fear of discovery stop us from doing what is right. No more! I cannot stay here with you. I cannot rest while HE sits on the throne! He is a monster of our own making! I must take the mantle back. I must! I must right these wrongs!