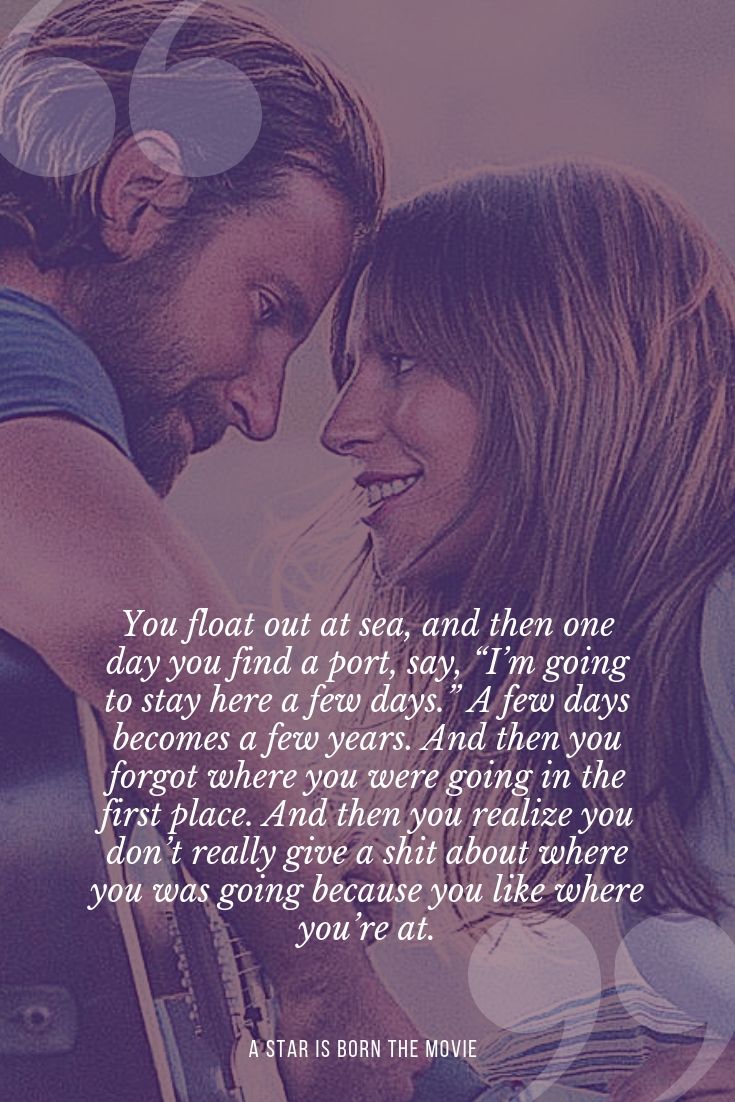 A Star Is Born (2018) Lady Gaga Top Quotes and Trailer

A Star Is Born is a 2018 American musical romantic drama film produced and directed by Bradley Cooper (in his directorial debut) and written by Eric Roth, Cooper, and Will Fetters. A remake of the 1937 film of the same name, it stars Cooper, Lady Gaga, Dave Chappelle, Andrew Dice Clay, and Sam Elliott, and follows a hard-drinking musician (Cooper) who discovers and falls in love with a young singer (Gaga). It marks the third remake of the original 1937 film, after 1954 musical and the 1976 musical. All four of the movies have been nominated for at least four Academy Awards. 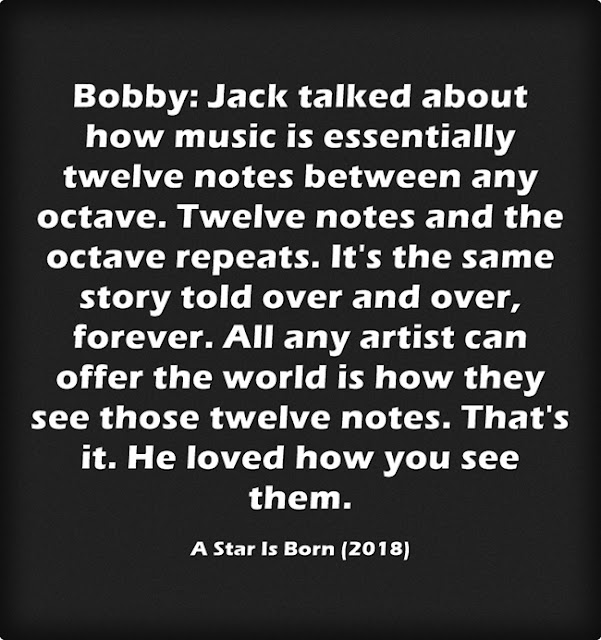 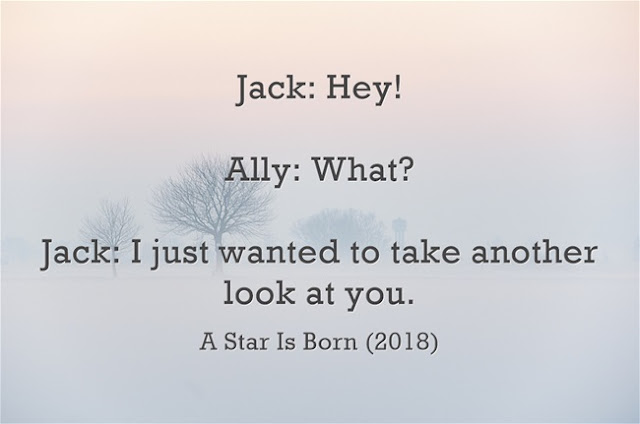 Bobby: Jack talked about how music is essentially twelve notes between any octave. Twelve notes and the octave repeats. It’s the same story told over and over, forever. All any artist can offer the world is how they see those twelve notes. That’s it. He loved how you see them.

Jack: I just wanted to take another look at you.

Jack: Could I ask you a personal question?

Jack: Do you write songs or anything?

Ally: I don’t sing my own songs.

Jack: Why wouldn’t you feel comfortable?

Ally: Because like almost every single person that I’ve come in contact with in the music industry has told me that my nose is too big and that I won’t make it.

Jack: That your nose is too big?

Jack: Your nose is beautiful. Are you showing me your nose right now?You don’t have to show it to me. I’ve been looking at it all night.

Jack: Oh, I’m going to be thinking about your nose for a very long time.

Jack: I’m not full of shit.

Ally: Yeah, you are.

Jack: I’m telling you the truth.

Jack: Look, talent comes everywhere. Everybody’s talented, fucking everyone in this bar is talented at one thing or another. But having something to say and a way to say it so that people listen to it, that’s a whole other bag. And unless you get out and you try to do it, you’ll never know. That’s just the truth. And there’s one reason we’re supposed to be here is to say something so people want to hear. Don’t you understand what I’m trying to tell you?

Jack: Oh, I think you like it a little bit.

George ‘Noodles’ Stone: You know it’s like, I dunno you… you float out… float out at sea then one day you find a port, say, ‘I’m gonna stay here a few days’. A few days becomes a few years. Then you forgot where you were going in the first place. Then you realize you don’t really give a shit about where you were going, cause you like where you at.

Jack: Can I touch your nose?

Jack: Let me just touch it for a second.

[He slides his finger down her nose]

Ally: Yeah, not really. My nose has not made me lucky.

Ally: I started writing this song the other day. Maybe that could work, like as a chorus or something.

[She gets up in front of Jackson and starts singing]

Ally: I’m off the deep end. Watch as I dive in. I never meet the ground. Crash through the surface, where they can’t hurt us. We’re far from the shallow now.

Jack: Can I tell you a secret?

[Ally looks over to him]

Jack: I think you might be a songwriter. And don’t worry, I won’t tell anybody. But I’m not very good at keeping secrets.

Jack: If I don’t say this then I’ll never forgive myself.

Ally: [singing] Tell me something, boy. Aren’t you tired trying to fill that void? Or do you need more? Ain’t it hard keeping it so hardcore?

Jack: Is that me?

Jack: Did you just write that now?

George ‘Noodles’ Stone: You know, it’s like, I don’t know, you float out, float out at sea, and then one day you find a port, say, ‘I’m going to stay here a few days’. A few days becomes a few years. And then you forgot where you were going in the first place. And then you realize you don’t really give a shit about where you was going because you like where you’re at.

Bobby: If I was no good, why did you steal my fucking voice? Huh?

Jack: Cause you had nothing to fucking say.

Jack: Yeah, who’s your fucking boyfriend? You got a boyfriend?

Ally: Yeah, I’ve got a boyfriend.

Jack: That hurts, calling me your fucking boyfriend.

Ally: You’re my boyfriend if you don’t treat me like your wife.

Ally: [sarcastically] Why don’t you have another drink? And we can just get fucking drunk until we fuckin’ disappear, okay? Hey! Do you got those pills in your pocket?

Ally: Get the fuck out! Get out! I said get out!

Cashier: [snaps a picture of Jack with her phone] I’m sorry. Had to.

Ally: It’s not really alright, but…

Jack: Have a good one.

Bobby: All Dad ever did for you is make you his fucking drinking buddy.

Ally: I won’t do this again. I won’t come and find you. Next time you can clean up your own mess.

Jack: Thank you, by the way.

Ally: Thank you for what?

Jack: For giving me a home. This place never felt like home before.

George ‘Noodles’ Stone: You know man, in the ol’ days, I always knew, like, you were going to do something, that you’d be alright. It’s the first time I’m worried about you.

Bobby: You think maybe he drinks a bit much? Sweetie, you have no idea.

4 of 4 found this interesting | Share this
Lorenzo: Actually, when I was in my 20s and 30s I was like a crooner. As a matter of fact, a lot of people thought I was better than Sinatra.

Rez Gavron: We have to change the color of your hair.

Ally: What’s wrong with my hair?

Ally: I don’t want to be a fucking blonde.

Bobby: I think if we had a better band name we might have made it. Or maybe it was because we looked like a father-and-son duo.

Rez Gavron: We’re not exactly friends here. While you’ve been away we’ve been back here in serious triage trying to clean up your fucking mess. Barely finding our way through it. You almost single-handedly derailed her whole career, do you understand that? She’s never going to say this to you. She loves you too much.

Jack: [speaking to the crowd] There’s a friend of mine who came a long way to be here and she wrote a great song and I’d just like her to sing it. I think it’s pretty fucking good.

Rez Gavron: What you have right now goes way beyond just this. There are people who need to hear what you have to say musically. It’s not normal stuff. It’s really amazing what you’re doing. I think you have it all, I do. The question to you is, what do you want?

Jack: What do you want me to play?

Emerald: I don’t care. Just look at me while you do it.

Ramon: How you doin’, papo?

Jack: How am I doing? I’m doing all right if I can get a fucking drink.

Ally: Nobody ever asks you about you, huh?

Ramon: I could get used to this shit. You need to date more rock stars, baby girl, you know what I mean? 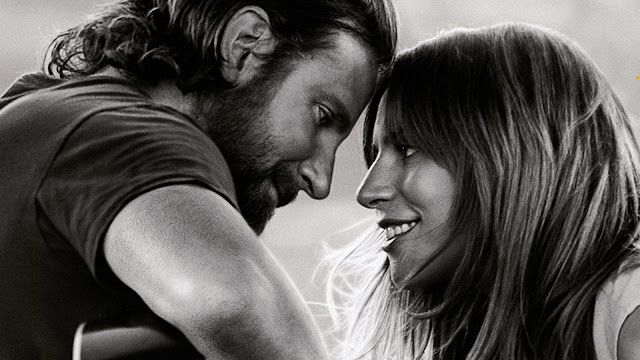